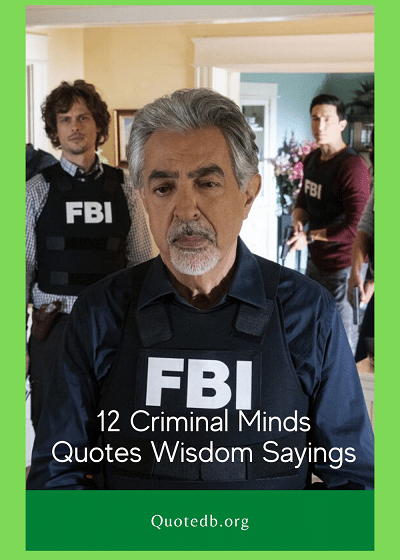 “The question that sometimes drives me hazy: Am I, or the others crazy?”
Albert Einstein (Season 1, Episode 9)

“Man is least himself when he talks in his own person. Give him a mask, and he will tell you the truth.”
Oscar Wilde (Season 2, Episode 4)

“It’s not so important who starts the game, but who finishes it.”
Erich Fromm (Season 2, Episode 7)

“All secrets are deep. All secrets become dark. That’s in the nature of secrets.”
Corey Doctorrow (Season 2, Episode 12)

“Love all. Trust a few. Do wrong to none.”
William Shakespeare (Season 3, Episode 9)

“So much of what is best in us is bound up in our love of family, that it remains the measure of our stability because it measures our sense of loyalty.”
Haniel Long (Season 5, Episode 9)

“There is a sacredness in tears. They are not the mark of weakness, but of power. They are messengers of overwhelming grief and unspeakable love.”
Washington Irving (Season 5, Episode 11)

“Oh what a tangled web we weave, when first we practice to deceive.”
Sir Walter Scott (Season 5, Episode 14)

“The single biggest problem with communication is the illusion that it has taken place.”
George Bernard Shaw (Season 5, Episode 14)

“The best and most beautiful things in the world cannot be seen or even touched—they must be felt with the heart.”
Helen Keller (Season 6, Episode 12)