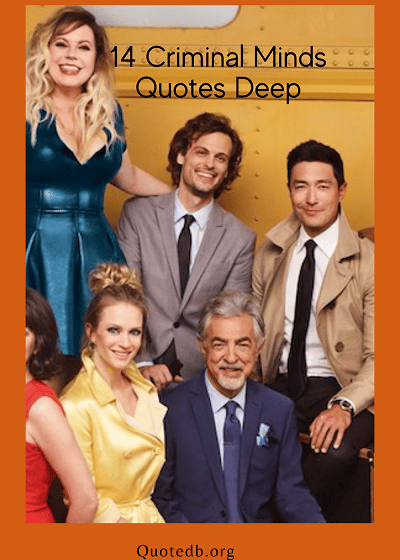 “The bond that links your true family is not one of blood, but of respect and joy in each other’s life.”
Richard Bach (Season 8, Episode 29)

“The greatest good you can do for another, is not to share your own riches, but to reveal to him, his own.”
Benjamin Disraeli (Season 8, Episode 6)

“There is no terror after the bang of the gun; only the anticipation in it.”
Alfred Hitchcock (Season 9, Episode 8)

“Forgiveness does not change the past but it does enlarge the future.”
Paul Boese (Season 9, Episode 13)

“There is no footprint too small to leave an imprint on this world.”
Unknown (Season 9, Episode 16)

“I remained too much in my head and ended up losing my mind.”
Edgar Allan Poe (Season 10, Episode 1)

“We knew the world would not be the same. Some people laughed. A few people cried. Most people were silent.”
J. Robert Oppenheimer (Season 10, Episode 3)

“Naïveté in grown ups is often charming. But when coupled with vanity, it is indistinguishable from stupidity.”
Eric Hoffer (Season 10, Episode 7)

“How people treat you is their karma; how you react is yours.”
Wayne Dyer (Season 10, Episode 8)

If one looks closely it is clear that the show was surely portraying a message despite many untrue events. The message was also heard in many of the quotes that were present throughout the episodes. I hope you found these quotes from the show entertaining and inspiring. Be sure to come back for more!