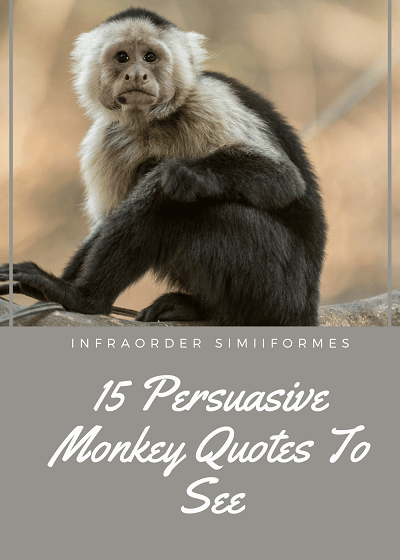 Monkey quotes take a look at the perspective of a few individuals and what they consider sound wisdom when it comes to the topic of the monkey. Permit me to say this, I find it difficult as a person who thinks soundly to believe that men came from monkeys of any kind. My reasoning tells me it is impossible for men to be related in any way to monkeys, regardless of what some may be considered similarities. Many doubt the Bible as true and ask for evidence, yet accept the monkey theory when up to now we haven’t seen a single monkey turn into a man or man become something else. I think this is a good time to encourage readers to view faith quotes from the bible and other faith-related matters. Below you can read a number of monkey quotes by various writers.

“Without pain, without sacrifice we would have nothing. Like the first monkey shot into space.”
Chuck Palahniuk

“By trying often the monkey learns to jump from tree to tree.”
African Proverb

“I think the discomfort that some people feel in going to the monkey cages at the zoo is a warning sign.”
Carl Sagan

“The higher a monkey climbs, the more you see of its behind.”
Joseph Sidwell

“A gorilla does not budge from a banana thrown at it by a monkey.”
Suzy Kassem

“Malcolm stared back calmly, though he felt anything but calm: if that monkey had a name, it might be Malice, he thought.”
Philip Pullman

“I learned the way a monkey learns by watching its parents.”
Prince Charles

“Until we see the monkeys do a round trip to Mars and return in a healthy state, talk of a manned mission to Mars is nothing more than corporate government propaganda.”
Steven Magee

“Betrayal is when your companion in a monkey hunt describes your head as being like that of a monkey.”
Vincent Okay Nwachukwu

“A monkey seldom slips on a banana peel.”
VKBoy

“Of course there is a monkey. There is always a monkey.”
Doug Dorst

“Comedians are the monkeys of acting. When you go to the zoo, everybody loves the monkey exhibit.”
Tracy Morgan

“You never monkey with the truth.”
Ben Bradlee

It is unlikely that everyone will agree with my statement above, but I stand strongly by my statement and my conscience guides me in that way. I do hope all who read the quotes found them interesting and might also enjoy reading lion quotes about the king of the jungle or safari, whichever you prefer. Just don’t monkey around with the truth!