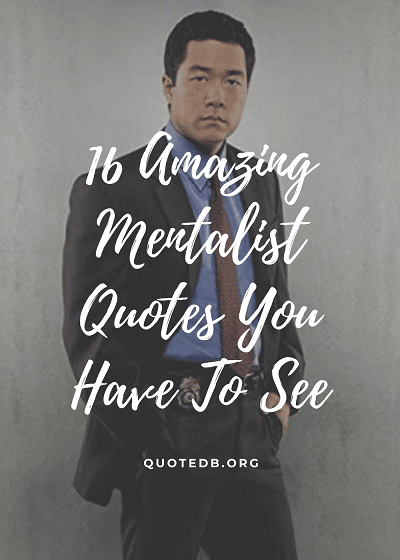 16 Amazing Mentalist Quotes You Have To See

Patrick Jane is one of the main characters in the show who is very good at playing mind games with those who are guilty of some crime. His biggest opposition comes from the character Red John who has eluded capture for 7 long seasons before he finally meets his end. If you are into films then maybe a look at Tom Hanks who is also an actor may prove a good read.

“Bullied at school were you?”
Patrick Jane

“I was not, actually.”
Mitch Cavanaugh

“Sure you were. Even now, after all these years, you lie awake sometimes thinking of all the ways that you could wreck revenge on your tormentors. And now out of fear and avarice, you let this man, Fanning, bully you the same way. Mitch, it’s the same way, the same thing. You gotta get a life.”
Patrick Jane

“Or get arrested.”
Teresa Lisbon

“Listen man, I’m an artist, okay? I’m arrogant, I’m dishonest and I’m childish. But you know what? I’m not stupid. I do not think I am above the law.”
Gabriel Fanning

“So what do you know, Mitch?”
Kimball Cho

“And he’s always right, is he?”
Mitch Cavanaugh

“I think I know what happened here, Sydney. I’m wondering if you do, too.”
Patrick Jane

“Uh, yeah. My boyfriend shot my dad. And then my stepmom shot my boyfriend. My life is like a sick joke.”
Sydney Hanson

“Patrick, would you do me a favor?”
Felicia Scott

“Tell Sydney I’m sorry. I see now, on reflection, I wasn’t the stepmother I might’ve been. I’m sorry for that. I did try. I hope and pray she doesn’t become bitter. But that she finds happiness. [sobs] Because happiness is so hard to find. Once you find it, you better hang on tight. Or you lose it.”
Felecia

The mentalist was a very witty show that benefited by playing on the minds of others. Not only for the show based on its script but for some viewers as well. The flow of the show used suspense as its biggest drive to remain a show on CBS for such along time. Once the Red John character was revealed that was it for the show. Check out Denzel Washington quotes for some more interesting quotes from an actor.