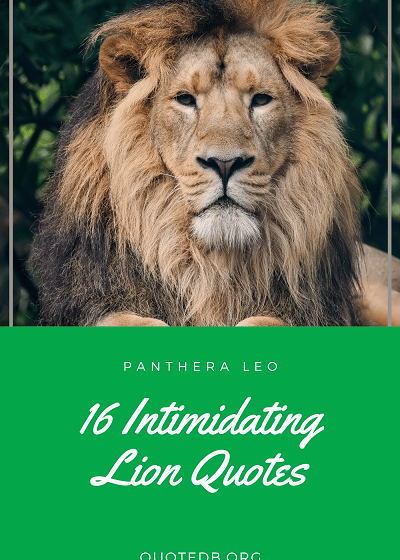 Lion quotes are some very intimidating remarks about an animal that has been dubbed the king of the jungle. This cat is second only in size to the tiger, see tiger quotes, but is very muscular and aggressive when necessary. There has been much debate about who will win between the two but these animals exist in different continents, and rightly so. Another amazing fact is that lions live mostly on open planes with very few trees blanketed together, they aren’t found in jungles. Below are some amazing lion quotes for you to enjoy.

“Are you going to be a lion or a sheep, a leader or a follower”
Beast Mode

“Attack your goals like your life depends on it.”
Lion Quotes

“Everyone wants to EAT, but few are willing to hunt”
Lion Quotes

“I AM a LION, not a sheep. A LEADER, not a follower.”
Lion Quotes

“Do i have all the answers: NO. Am i committed to finding them: YES!”
Lion Quotes

“A lion doesn’t concern itself with the opinion of sheep.”
George R.R. Martin

“Did you think the lion was sleeping because he didn’t roar?”
Friedrich Schiller

“She slept with wolves without fear, for the wolves knew a lion was among them.”
R.M. Drake

“If ever you feel like an animal among men, be a lion.”
Criss Jami

Lions are vicious animals who show no fear and many individuals consider these apex predators a good symbol to describe themselves. The lion has been symbolic of Satan in one regard but also in reference to Jesus Christ in another. One has a negative attribute for the LORD it is a positive attribute, very interesting indeed. On this note be sure to read on another animal that is considered powerful, read funny horse quotes, do enjoy!