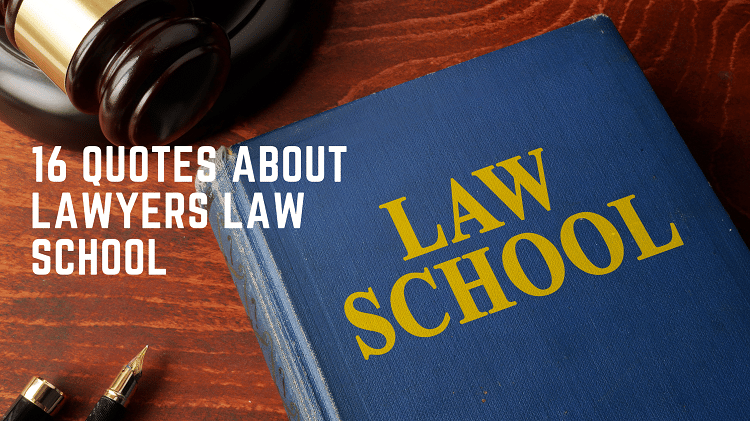 “I supposed if you were going to make a career of breaking laws, you might as well know them.”
Richelle Mead

“The study of law can be disappointing at times, a matter of applying narrow rules and arcane procedure to an uncooperative reality; a sort of glorified accounting that serves to regulate the affairs of those who have power–and that all too often seeks to explain, to those who do not, the ultimate wisdom and justness of their condition.”
Barack Obama

“But that’s not all the law is. The law is also memory; the law also records a long-running conversation, a nation arguing with its conscience.”
Barack Obama

“Perhaps the most important thing I learned was about democracy, that democracy is not our government, our constitution, our legal structure. Too often they are enemies of democracy.”
Howard Zinn

“Straining at gnats and swallowing camels is a required course in all law schools.”
Robert A. Heinlein

“Girls don’t go to law school,” I told him.
“No, but women do.”
Rikki Klieman

“It’s often the most naturally intelligent students who have the most difficult time in their first year — law school, particularly the first year of law school, is not really a place where creativity, abstract thought, and imagination are rewarded. In this way, I often think — based on what I’ve heard, not what I know firsthand — that it’s a bit like art school.”
Hanya Yanagihara

“Law firms can create environments for abusive relationships. This is especially true if an attorney has no self-direction, has no independent means of financial support, and has massive student loan indebtedness. You’ve basically made yourself an indentured servant.”
Robin D. Hart

“Don’t you think most of those kids think too much about who got an A or a B when they were in law school and what that means to an inflated G.P.A. and not enough about the world?” asked Connor irrelevantly.”
Daniel Amory

“Law school teaches you one thing above all: how to speak while saying absolutely nothing.”
Krysten Ritter

“Law school is a test – not a test of strength, creativity, or intelligence – but one of endurance. A law student’s greatest nemesis is not mastering legal concepts, but enduring the hours of solitude, which endless studying requires.”
Kilroy J. Oldster

“Hard cases, it has been frequently observed, are apt to introduce bad law.”
Lord Abinge

“When I’m sometimes asked when will there be enough women on the Supreme Court and I say, ‘When there are 9,’ people are shocked. But there’d been 9 men, and nobody’s ever raised a question about that.”
Supreme Court Justice Ruth Bader Ginsburg

“Be sure to put your feet in the right place, and then stand firm.”
Abraham Lincoln

“A lawyer without books would be like a workman without tools.”
Thomas Jefferson

“A jury consists of 12 persons chosen to decide who has the better lawyer.”
Robert Frost

Law school can be a bit intimidating, but many have gone through the process and have become presidents, chief justices, attorneys, judges, and filled many other law-related positions. To be a lawyer takes quite a bit of effort and understanding, but anything is possible. To anyone who aspires to be a lawyer be sure to give your best, anything less isn’t good enough.