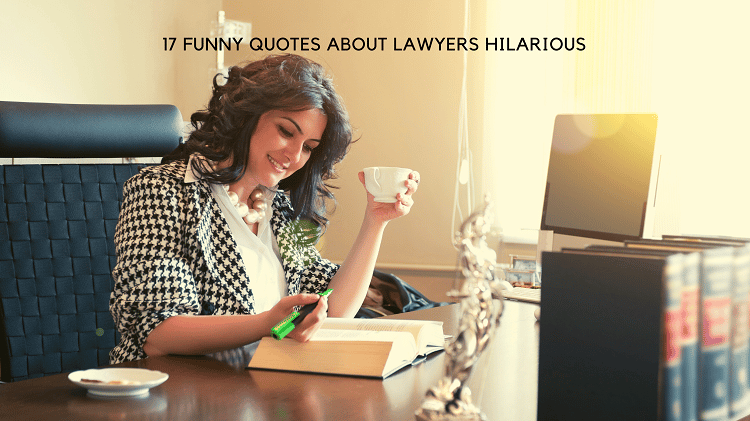 Funny quotes about lawyers hilarious statements will make laugh all the way to the law courts as that’s where many of these funny sayings will take you. It is amazing what these quotes say and the only way to see what I am talking about is to read it for yourself. You can also check out funny engineering quotes while you are at it. Below you can read funny quotes about lawyers that are hilarious.

“A lawyer with a briefcase can steal more than a thousand men with guns.”
Mario Puzo

“You win some and you lose some, but you get paid for all of them.”
Anonymous

“I don’t think you can make a lawyer honest by an act of legislature. You’ve got to work on his conscience. And his lack of conscience is what makes him a lawyer.”
Will Rogers

“The good lawyer is not the man who has an eye to every side and angle of contingency, and qualifies all his qualifications, but who throws himself on your part so heartily, that he can get you out of a scrape.”
Ralph Waldo Emerson

“A judge is a law student who marks his own examination papers.”
H. L. Mencken

“To me, a lawyer is basically the person that knows the rules of the country. We’re all throwing the dice, playing the game, moving our pieces around the board, but if there is a problem the lawyer is the only person who has read the inside of the top of the box.”
Jerry Seinfeld

“In America, an acquittal doesn’t mean you’re innocent, it means you beat the rap. My clients lose even when they win.”
F. Lee Bailey

“Insofar as manifestations of functional deficiencies are agreed by any and all concerned parties to be imperceivable, and are so stipulated, it is incumbent upon said heretofore mentioned parties to exercise the deferment of otherwise pertinent maintenance procedures.

In other words, if it ain’t broke, don’t fix it.”
Anonymous

“Law students are trained in the case method, and to the lawyer everything in life looks like a case.”
Edward Packard, Jr.

“Lawyers are just like physicians: what one says, the other contradicts.”
Sholom Aleichem

“A lawyer is a person who writes a 10,000-word document and calls it a “brief.”
Franz Kafka

“The minute you read something that you can’t understand, you can almost be sure that it was drawn up by a lawyer.”
Will Rogers

“A Lawyer will do anything to win a case, sometimes he will even tell the truth.”
Patrick Murray

“Lawyers are the only persons in whom ignorance of the law is not punished.”
Jeremy Bentham

“In the Halls of Justice the only justice is in the halls.”
Lenny Bruce

“He who is his own lawyer has a fool for a client.”
Proverb

Being a lawyer is a tricky business and it takes a smart person to understand and attempt to do what is required. That is evident in some of the quotes you would have read above. Somethings are just left to the professionals, right? In any case, I hope you found the lawyer quotes entertaining and be sure to check out funny cooking quotes, even a lawyer has to eat.