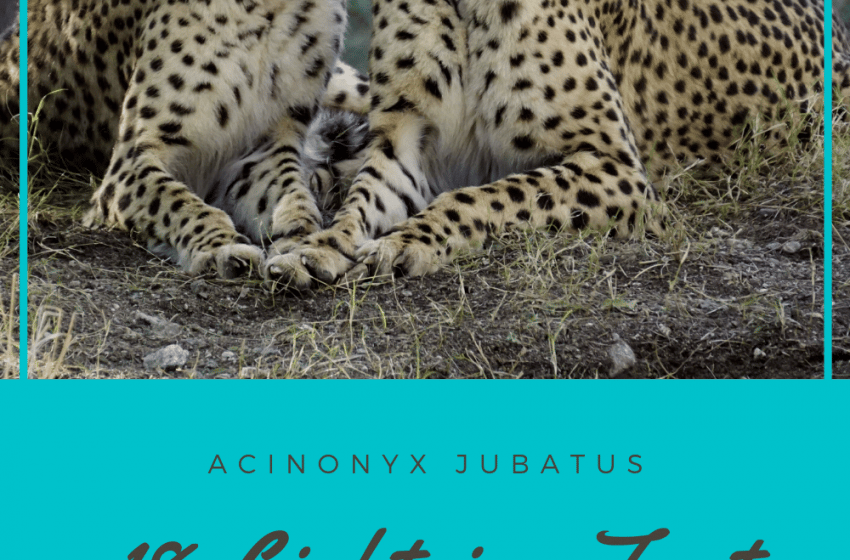 Cheetah quotes are a special collection of statements about cheetahs, making comparisons to cheetahs and any other related cheetah matters. Cheetahs, as we know, are the fastest land animals and have a fabulous coat. This has caused them to be slaughtered for their skin, and much effort has transpired to protect them from extinction. Another wonderful animal post is leopard quotes, for more about big cats. Below you can take a look at cheetah quotes for a quick read.

“Why should I stretch? Does a cheetah stretch before it chases its prey?”
Ken Griffy Jr.

“To me, fast food is when a cheetah eats an antelope.”
George Carlin

“What are you?” I said irritably. “In the Serengeti, Ms. Lane, I would be the cheetah. I’m stronger, smarter, faster, and hungrier than everything else out there. And I don’t apologize to the gazelle when I take it down.”
Karen Marie Moning

“These magnificent species of Africa – elephants, rhino, lions, leopards, cheetah, the great apes (Africa has four of the world’s five great apes) – this is a treasure for all humanity, and they are not for sale. They are not for trade. They need to be valued and preserved by humanity. We all need a global commitment to that.”
Patrick Bergen

“Take, for example, the African jungle, the home of the cheetah. On whom does the cheetah prey? The old, the sick, the wounded, the weak, the very young, but never the strong. Lesson: If you would not be prey, you had better be strong.”
G. Gordon Liddy

“I grew a love for helpless, defenseless things. People would give me lions and jaguars. I had cheetahs, monkeys.”
Dick Dale

“I saw this bloke chatting up a cheetah. He was trying to pull a fast one.”
Tim Vine

“I just use my muscles as a conversation piece, like someone walking a cheetah down 42nd Street.”
Arnold Schwarzennegger

“I don’t think my moped could outrun a cheetah.”
Jonathon Messinger

“Cheetah genes cooperate with cheetah genes but not with camel genes, and vice versa. This is not because cheetah genes, even in the most poetic sense, see any virtue in the preservation of the cheetah species. They are not working to save the cheetah from extinction like some molecular World Wildlife Fund.”
Richard Dawkins

“The ‘Cheetah Generation’ refers to the new and angry generation of young African graduates and professionals, who look at African issues and problems from a totally different and unique perspective.”
George Ayittey

“A competitive athlete is painful to look at; trying hard to become an animal rather than a man, he will never be as fast as a cheetah or as strong as an ox.”
Nassim Nicholas Taleb

“I can give or take elephants; I never can find the cheetah-but the zebras captivate me. They’d be one of the few things that would fit if we were lucky enough to live in a world that’s black or white.”
Jodi Picoult

“The more I think about it, the more there is to be said for the sloth. He sleeps fifteen to eighteen hours a day and is known to have taken forty-eight days to travel four miles. He hangs in the trees after he’s dead. But he lives longer than the cheetah.”
Erma Bombeck

Reading what others had to say about cheetahs can be a very interesting thing to do. There are literally quotes about everything possible under the sun. Cheetahs are magnificent creatures and admired by many, so I am sure anyone who reads about them here will find the quotes somewhat electrifying. For more on big cats, check out tiger quotes, another awesome read if I do say so.