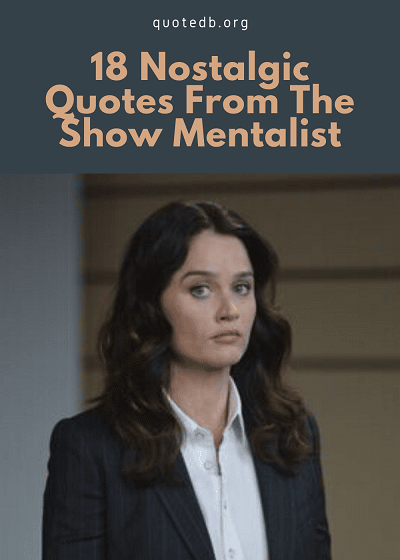 18 Nostalgic Quotes From The Show Mentalist

The Mentalist was a very popular show in the early 2000s and held its own as a show to watch for a long time. The characters in the show all blended together to give it an intriguing story line. The mystery of Red John tantalized viewers for years as everyone tried to determine who it was. Criminal Minds quotes, similar in some ways The Mentalist, finds the bad guys or girls and arrest them.

“I wasn’t aware it was a crime to be intelligent.”
Oliver

“Well, I don’t care about the device.”
Teresa Lisbon

“You don’t care about a code breaking device that could hack into our government’s National Security System? There’s no bigger patriotic lesson. Pina Colada?”
Patrick Jane

“I just happen to have it on disc right here. [Quietly to Lisbon] It has some great photos.”
Patrick Jane

“I just hope you don’t mind. I did have a little fiddle with it. I just wanted to see how it works. [Hands the device to Tolman] Easily fixed I imagine. [Noticing more pieces] What’s that? That may be part of it.”
Patrick Jane

“You’re going to be hearing from my attorney!”
Tolman

“We showed you our badges and identified ourselves.”
Kimball Cho

“Tolman, one last thing. Bishop to C4. Forced to mate in 3 moves. I win. Come and take a closer look. You’ll see it.”
Teresa Lisbon

“You should tell the truth Mr. Mosca. It’s easier to remember.”
Kimball Cho

“I could arrest you for that.”
Kimball Cho

“You never watch movies? That’s how the bad guys do it.”
Adrian Mosca

“Seriously. It’s Marilyn and Charlie. What? Do you want to make a comedy arrest? See your name written in the weird news section?”
Patrick Jane

There is no doubt that the story about Red John and the smarts of Patrick Jane was the foundation of the series. Those who consider themselves romantics looked for the day when Jane and Teresa would tie the knot and ride off into the sunset. For other popular actors you can check out Brad Pitt quotes, this site is filled with actors and actresses who share their thoughts.