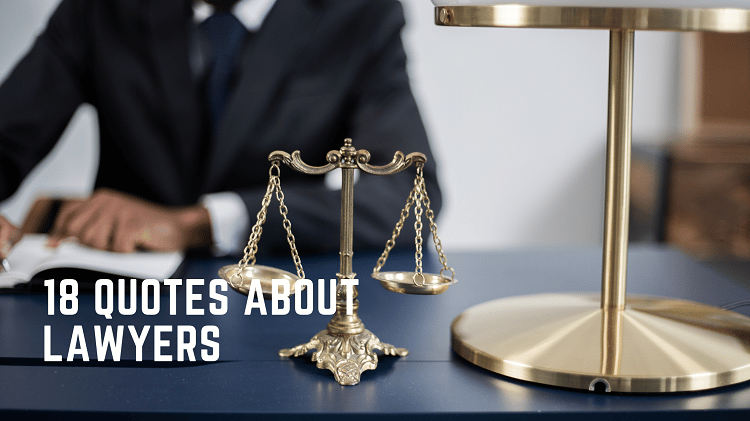 Quotes about lawyers is a compilation of quotes by many intelligent individuals who have been part of the justice system or know enough to speak about issues related to the law of the land. Poets and former presidents among pothers have all given their input in regards to the laws of the land. The best lawyers are those who know how to manipulate the weaknesses in the law and that can be understood from reading the quotes below. Be sure to also read quotes about lawyer law school and compare it to quotes about lawyers here below.

“The lawyer’s truth is not Truth, but consistency or a consistent expediency.”
Henry David Thoreau

“A jury too often has at least one member more ready to hang the panel than to hang the traitor.”
Abraham Lincoln

“Let me not be understood as saying that there are no bad laws, nor that grievances may not arise for the redress of which no legal provisions have been made. I mean to say no such thing. But I do mean to say that although bad laws, if they exist, should be repealed as soon as possible, still, while they continue in force, for the sake of example they should be religiously observed.”
Abraham Lincoln

“Certainly one of the highest duties of the citizen is a scrupulous obedience to the laws of the nation. But it is not the highest duty.”
Thomas Jefferson

“Whatever the human law may be, neither an individual nor a nation can commit the least act of injustice against the obscurest individual without having to pay the penalty for it.”
Henry David Thoreau

“To succeed in the other trades, capacity must be shown; in the law, concealment of it will do.”
Mark Twain

“I would be loath to speak ill of any person who I do not know deserves it, but I am afraid he is an attorney.”
Samuel Johnson

“This is a court of law young man, not a court of justice.”
Oliver Wendell Holmes

“It is the trade of lawyers to question everything, yield nothing, and talk by the hour.”
Thomas Jefferson

“Lawyers know life practically. A bookish man should always have them to converse with.”
Samuel Johnson

“Curse on all laws, but those that love has made.”
Alexander Pope

“We have a criminal jury system which is superior to any in the world; and its efficiency is only marred by the difficulty of finding twelve men every day who don’t know anything and can’t read.”
Mark Twain

“Whenever you wish to do anything against the law, Cicely, always consult a good solicitor first.”
George Bernard Shaw

“We have a criminal jury system which is superior to any in the world; and its efficiency is only marred by the difficulty of finding twelve men every day who don’t know anything and can’t read.”
Ralph Waldo Emerson

Being a lawyer can be a tough business as many of them can make enemies by just doing what is right. It is certainly not a job for the faint of heart, yet many ventures into this type of work every year. As you contemplate on your desire to be a lawyer check out quotes about good lawyers and do put your best foot forward.