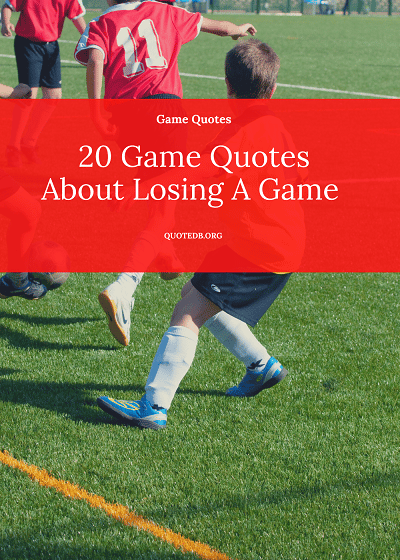 20 Game Quotes About Losing A Game

Game quotes about losing a game take a look at the many personalities who lost games and reflected on what could have been. In this post, you will read various sporting individuals and others talk about the experience of losing a game. For many its, not a good feeling but it is what you do after that really counts. You can read up more about sports by checking out funny sports quotes, can you relate? Below are a number of game quotes about losing a game to see.

“I’ve missed more than 9000 shots in my career. I’ve lost almost 300 games. 26 times, I’ve been trusted to take the game winning shot and missed. I’ve failed over and over and over again in my life. And that is why I succeed.”
Michael Jordan

“Losing a game is not a big deal, except you’ve got to make sure that you move on and get the next one.”
Martin Brodeur

“That’s what learning is, after all; not whether we lose the game, but how we lose and how we’ve changed because of it, and what we take away from it that we never had before, to apply to other games. Losing, in a curious way is winning.”
Richard Bach

“You’re never a loser until you quit trying.”
Mike Ditka

“Losing a game is heartbreaking. Losing your sense of excellence or worth is a tragedy.”
Joe Paterno

“We play a sport. It’s a game. At the end of the day, that’s all it is, is a game. It doesn’t make you any better or any worse than anybody else. So by winning a game, you’re no better. By losing a game, you’re no worse. I think by keeping that mentality, it really keeps things in perspective for me to treat everybody the same.”
Tim Tebow

“The price of success is hard work, dedication to the job at hand, and the determination that whether we win or lose, we have applied the best of ourselves to the task at hand.”
Vince Lambordi

“Losing doesn’t eat at me the way it used to. I just get ready for the next play, the next game, the next season.”
Troy Aikman

“The will to win is important, but the will to prepare is vital.”
Joe Paterno

“The minute you start talking about what you’re going to do if you lose, you have lost.”
George P Shultz

“You need to play with supreme confidence, or else you’ll lose again, and then losing becomes a habit.”
Joe Paterno

“Besides pride, loyalty, discipline, heart, and mind, confidence is the key to all the locks.”
Joe Paterno

“The price of success is hard work, dedication to the job at hand.”
Vince Lambordi

“There are more important things in life than winning or losing a game.”
Lionel Messi

“The biggest surprise has been making the adjustment after losing a game. In the NBA you could lose tonight and you have to put that game behind you because you have another game the next night..”
Dwayne Wade

“Nobody even mentioned the word losing, losing games. We know we’ve been a losing franchise. He just wanted to say something back like he’s always running his mouth. That’s what he does. He runs his mouth all the time. Nobody was blaming him for anything. For him to come back at me was a personal attack. I feel that if there is anything that he is unsure about, tell him I would be more than happy to say it in his face, or any kind of other way, that would make him understand.”
Carl Crawford

“One is always more vexed at losing a game of any sort by a single hole or ace, than if one has never had a chance of winning it.”
William Hazlitt

“Goalies almost never get credit for winning a game, but they always get blamed for losing a game.”
Steve Carell

“Suppose it were perfectly certain that the life and fortune of each of us would some day depend upon our winning or losing a game of chess. Do you not think that we should all consider it to be our primary duty to learn at least the names of the pieces and how to position them on the chessboard?”
Aldous Huxley

Losing a game is never fun, no one really wants to lose, unfortunately someone must, that is how the game is played. Character comes from what happens after as previously mentioned, do you rise up and overcome the loss? Or do you stay in a shell and sulk it out? My hope is like the writers you just read from you pick up the pieces and rebuild. Be sure to also take a look at game quotes for kids.