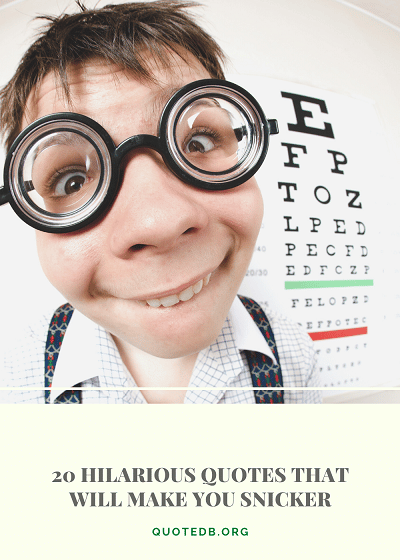 20 Hilarious Quotes That Will Make You Snicker

Reading funny and hilarious quotes will make you laugh until your stomach hurts. Have you ever laughed so loud and hard until your head begins to hurt? If so then you need to laugh a lot more because more than likely it is stress or tension that is causing you this feeling. You would be amazed at how easily laughter can change your entire life. Feel free to check out funny mom quotes and read more hilarious quotes. There are tons of content on funny quotes and below you will read another batch of them.

“A bank is a place that will lend you money if you can prove that you don’t need it.”
Bob Hope

“Inside me there’s a thin person struggling to get out, but I can usually sedate him with four or five cupcakes.”
Bob Thaves

“We never really grow up, we only learn how to act in public.”
Bryan White

“As a child my family’s menu consisted of two choices: take it or leave it.”
Buddy Hacket

“My favorite machine at the gym is the vending machine.”
Caroline Rhea

“All right everyone, line up alphabetically according to your height.”
Casey Stengel

“He who laughs last didn’t get the joke.”
Charles de Gaulle

“I always arrive late at the office, but I make up for it by leaving early.”
Charles Lamb

“Don’t worry about the world coming to an end today. It is already tomorrow in Australia.””
Charles Shultz

“By the time a man realizes that his father was right, he has a son who thinks he’s wrong”
Charles Wadsworth

“A day without laughter is a day wasted.”
Charlie Chaplin

“High heels were invented by a woman who had been kissed on the forehead.”
Christopher Morley

“When I was a boy I was told that anybody could become President. I’m beginning to believe it.”
Clarence Darrow

“A stockbroker urged me to buy a stock that would triple its value every year. I told him, ‘At my age, I don’t even buy green bananas.’”
Claude Pepper

“A study in the Washington Post says that women have better verbal skills than men. I just want to say to the authors of that study: ‘Duh.’”
Conan O’Brien

“Laughing at our mistakes can lengthen our own life. Laughing at someone else’s can shorten it.”
Cullen Hightower

“If you can’t live without me, why aren’t you dead already?”
Cynthia Heimel

“If you think you are too small to make a difference, try sleeping with a mosquito.”
Dalai Lama

It is time to feel better and to enjoy life more and all it requires is for you to read a bit more. Not just anything but funny stuff, that is where the action can be found, everyone loves to laugh if you don’t then you should. Also, check out funny golf quotes, amazing stuff.