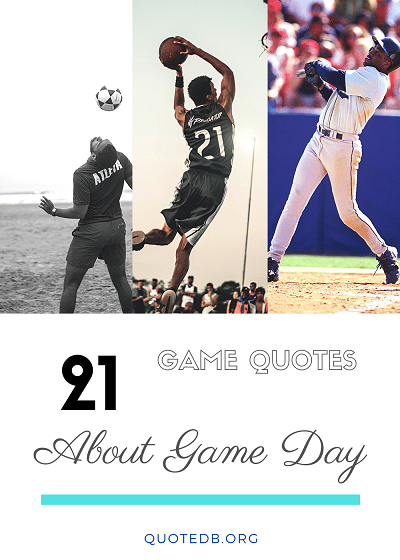 “You have to expect things of yourself before you can do them.”
Michael Jordan

“Some people want it to happen, some wish it would happen, others make it happen.”
Michael Jordan

“Champions do not become champions when they win the event, but in the hours, weeks, months and years they spend preparing for it. The victorious performance itself is merely the demonstration of their championship character.”
Alan Armstrong

“The principle is competing against yourself. It’s about self-improvement, about being better than you were the day before.”
Steve Young

“Sports do not build character. They reveal it.”
Heywood Broun

“It isn’t hard to be good from time to time in sports. What is tough, is being good every day.”
Willie Mays

“You don’t show up on game day and expect to be great. Greatness happens in practice. You have to expect things of yourself before you can do them.”
Michael Jordan

“If someone met me on a game day, he wouldn’t like me. The days in between, I’m the goodest guy you can find.”
Roger Clemens

“What’s tough is being good every day.”
Willie Mays

“On game day, I’m as nervous as a pig in a packing plant.”
Darrell Royal

“If we lose a game, I change up what I did that day, like if I eat something that day I will not eat the same thing again the next game day.”
Kliff Kingsbury

“It’s an honor to support such a worthy program.TURF aims to protect the integrity of tailgating and to keep game day family-friendly.”
Boomer Esiason

“I do like to wear the same hat on game days, but I consider that more of a routine thing than a superstition.”
David Wright

“You know, you can try and plan [filming] as much as you want, but you get there on game day and you get thrown a curve ball, I guess, hey, the game plan goes out the window. You’ve got to adapt.”
Michael B. Jordan

“My overall knowledge of football specifications, the overall process that happens on game day with the footballs is very limited. I would say that during the course of the game, I honestly never – it probably has happened on an incomplete pass or something – but I’ve never touched a game ball. It’s not something I have any familiarity with on that.”
Bill Belichick

“I’ve learned a lot about the process. I had no idea how the balls got from the officials locker room down on the field and so forth and so on and all of that. That’s not something I have ever thought or concerned myself about [on] game day. I’ve concerned myself with preparing and coaching the team.”
Bill Belichick

“No special suits for game days. I like to keep all my favorites in the mix. I’m always trying to look my best, even when I’m just visiting a city for eight hours and then getting back on a plane again.”
Henrik Lundqvist

“[The movies] glamorize game day a little bit too much. It’s such a focus. They miss a lot of the nuts and bolts, and the time that goes into the preparation each week, or each couple of days in basketball.”
Vince Kehres

“While I was coaching, I believe the motivation talk I gave my players that achieved the best results was in reference to their present game-day effort. I stressed the fact that today’s performance could be the most important of their life. Yesterday’s performance was already history. Tomorrow really never comes, so today’s performance is what really counts.”
Bill Sharman

“I still miss the players and I miss the game and the strategy. The first couple years were really difficult. Now I realize I’ll never coach again. It’s still hard to go into the stadium on a game day, because it’s hard to just be a fan. But it’s easier now than it was the first two or three years.”
Tom Osborne

Don’t let game day scare you, just listen to what the writers had to say, some challenges bring out the best in you and help you realize your true potential. Be encouraged to do the best you can be when your time comes, believe you can do it. Be sure to also check out game quotes about losing a game, win or lose take it gracefully.