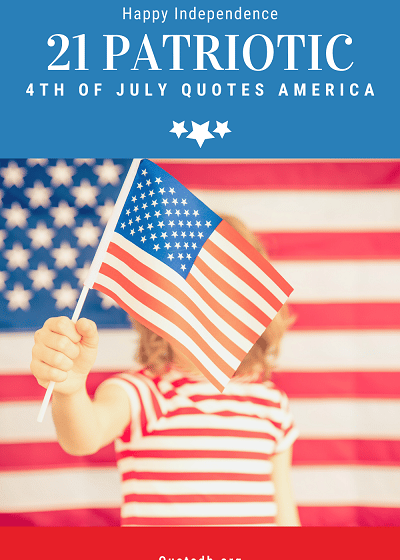 July 4th quotes America is a compilation of sayings by many great American heroes who have given to their country in one way or another. The writers who have been added to this post are men who fought battles to bring the freedom that all hold dear. Many have contributed in other ways that have seen this nation flourish. For even more beautiful comments about America’s Independence day read July 4th quotes freedom and be sure to read the July 4th quotes America below for inspiration.

“Duty, honor, country. Those three hallowed words reverently dictate what you ought to be, what you can be, what you will be.”
General Douglas MacArthur

“It’s better to fight for something in life than to die for nothing.”
General George S. Patton

“The legacy of heroes—the memory of a great name, and the inheritance of a great example.”
Benjamin Disraeli

“May we think of freedom, not as the right to do as we please, but as the opportunity to do what is right.”
Peter Marshall

“You have to love a nation that celebrates its independence every July 4th, not with a parade of guns, tanks, and soldiers who file by the White House in a show of strength and muscle, but with family picnics where kids throw Frisbees, the potato salad gets iffy, and the flies die from happiness. You may think you have overeaten, but it is patriotism.”
Erma Bombeck

“Independence Day: freedom has its life in the hearts, the actions, the spirit of men and so it must be daily earned and refreshed – else like a flower cut from its life-giving roots, it will wither and die.”
Dwight D. Eisenhower

“It will be celebrated with pomp and parade, bonfires and illuminations from one end of this continent to the other.”
John Adams

“Then join hand in hand, brave Americans all! By uniting we stand, by dividing we fall.”
John Dickinson

“We on this continent should never forget that men first crossed the Atlantic not to find soil for their ploughs but to secure liberty for their souls.”
Robert J. McCracken

“America is a tune. It must be sung together.”
Gerald Stanley Lee

“My favorite thing about the United States? Lots of Americans, one America.”
Val Saintsburt

“Give me liberty or give me death!”
Patrick Henry

“We hold our heads high, despite the price we have paid, because freedom is priceless.”
Lech Walesa

“Our country is not the only thing to which we owe our allegiance. It is also owed to justice and to humanity. Patriotism consists not in waving the flag, but in striving that our country shall be righteous as well as strong.”
James Bryce

America is known as the land of the free and the home of the brave and as Independence Day approaches may these beautiful quotes bring motivation and hope to a land that faces many challenges. If you found what you have already read inspiring be sure to read July 4th quotes fireworks as well, light up your mind with these powerful reminders of liberty.