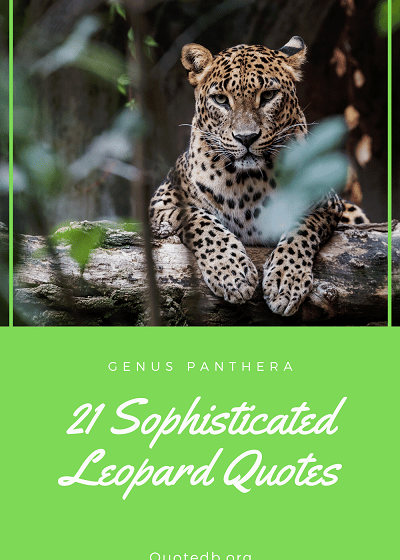 Leopard quotes take a look at one of the most beautiful cats you will ever see because of its coat and variation by species. The snow leopard has a brilliant coat that is quite desirable, so much so that these felines have been hunted for their coats for the purpose of fashion. They will give a tiger a run for beauty on any given day, on the topic of tiger you can check tiger quotes as well. Below are a number of leopard quotes to enjoy.

“Be motivated like the falcon, hunt gloriously. Be magnificent as the leopard, fight to win. Spend less time with nightingales and peacocks. One is all talk, the other only color.”
Rumi

“The leopard does not change his spots.”
William Shakespeare

“A world without leopards, well, who would want to live in it?”
Diana Vreeland

“A leopard does not change his spots, or change his feeling that spots are rather a credit.”
Ivy Compton-Burnett

“A leopard doesn’t change his spots just because you bring him in from the jungle and try to housebreak him and turn him into a pet. He may learn to sheathe his claws in order to beg a few scraps off the dinner table, and you may teach him to be a beast of burden, but it doesn’t pay to forget that he’ll al ways be what he was born: a wild animal.”
George Lincoln Rockwell

“There’s so much plastic in this culture that vinyl leopard skin is becoming an endangered synthetic.”
Lily Tomlin

“The snow leopard is absolutely magnificent. It represents really what endangered species are all about.”
Jack Hanna

“You can’t get a leopard to change his spots. In fact, now that I come to think of it, you can’t really get a leopard to appreciate the notion that it has spots. You can explain it carefully to the leopard, but it will just sit there looking at you, knowing that you are made of meat. After a while it will perhaps kill you.”
Geoffrey K. Pullum

“You’re like this leopard who’s pretending to be a house cat.”
Holly Black

“You cannot change the stripes of a leopard.”
Emmitt Smith

“I don’t have to be logical. I’m a leopard. We’re considered wild animals, you know.”
Amy Neftzger

“we only asked for leopards to guard our thinning dreams.”
Charles Bukowski

“As leopard feels at home with leopard.”
George Eliot

“We all know the leopard can’t change his stripes.”
Al Gore

“The Ethiopian cannot change his skin nor the leopard his spots.”
Henry David Thoreau

“the African leopard is an audacious animal, although it is ungrateful of me to say a word against him, after the way he has let me off personally … taken as a whole, he is the most lovely animal I have ever seen; only seeing him, in the one way you can gain a full idea of his beauty, namely in his native forest, is not an unmixed joy to a person, like myself, of a nervous disposition.”
Mary Kingsley

“As far as I’m concerned, leopard is a neutral.”
Jenna Lyons

“The autumn always gets me badly, as it breaks into colours. I want to go south, where there is no autumn, where the cold doesn’t crouch over one like a snow-leopard waiting to pounce.”
D. H. Lawrence

“The only way a no-legged leopard could hurt you is if it fell out of a tree onto your head.”
Ellen DeGeneres

“The wolf also shall dwell with the lamb, and the leopard shall lie down with the kid.
Isaiah

The leopard has been one of the animals of contention as one of the species in on the endangered species list. The snow leopard probably the most beautiful of all leopards has been hunted for their coats and are nearing extinction. Much effort is underway to save this creature from existence. Be sure to also read lion quotes a wonderful collection quotes about lions.