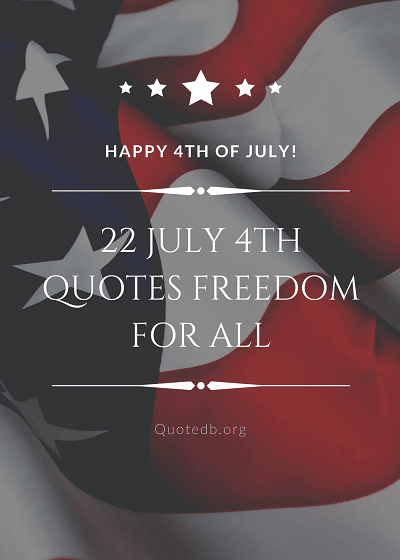 22 July 4th Quotes Freedom For All

“With freedom, books, flowers, and the moon, who could not be happy?”
Oliver Wilde

“I think of a hero as someone who understands the degree of responsibility that comes with his freedom.”
Bob Dylan

“For to be free is not merely to cast off one’s chains, but to live in a way that respects and enhances the freedom of others.”
Nelson Mandela

“Patriotism consists not in waving the flag, but striving that our country shall be righteous as well as strong.”
James Bryce

“I think patriotism is like charity — it begins at home..”
Henry James

“In the face of impossible odds, people who love their country can change it.”
Barack Obama

“The essence of America, that which really unites us, is not ethnicity or nationality or religion. It is an idea, and what an idea it is — that you can come from humble circumstances and do great things.”
Condoleezza Rice

“That is the truly beautiful and encouraging aspect of freedom; no one struggles for it just for himself.”
Fanny Lewald

“Freedom is one of the deepest and noblest aspirations of the human spirit.”
Ronald Reagan

“Everything I have, my career, my success, my family, I owe to America”
Arnold Schwarzzenegger

“We must be free not because we claim freedom, but because we practice it.”
William Faulkner

“This nation will remain the land of the free only so long as it is the home of the brave.”
Elmer Davis

“One flag, one land, one heart, one hand, one nation evermore!”
Oliver Wendell Holmes

“The American flag is the symbol of our freedom, national pride and history.”
Mike Fitzpatrick

“Liberty is the breath of life to nations.”
George Bernard Shaw

“Those who won our independence believed liberty to be the secret of happiness.”
Louis D Brandeis

“Where liberty dwells, there is my country.”
Benjamin Franklyn

Life has been difficult in a country where all men should be free, but at times that hasn’t always been the case. Let us pray that the freedom all individuals deserve may be forthcoming as Independence Day approaches. Even as you take time to read about a man like Benjamin Franklin, let his vision for a free country resound in your behavior towards others. Happy July 4th!