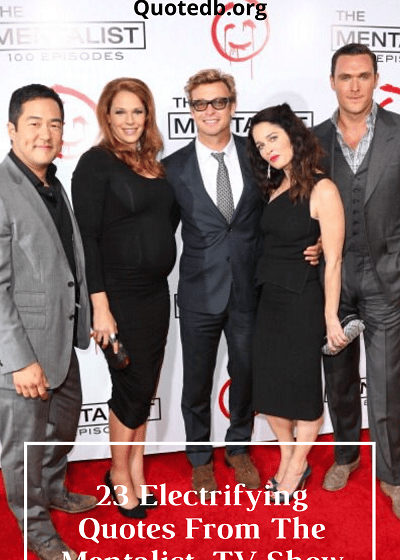 The Mentalist was one of the most intriguing drama shows that ever showed on television and many of the scenes have been cherished in quotes. The quotes on this page will definitely bring back memories from the show, as you read reminisce and be inspired in some form. If you are interested in more quotes from actors or actresses then check out Jennifer Aniston quotes. Below are some electrifying Mentalist quotes.

“Showing the Dovertons to Donny Culpepper. You wanted to see if he recognized one of them, didn’t you?”
Teresa Lisbon

“You watch too much TV. I just thought there was no reason for Donny Culpepper to be here.”
Patrick Jane

“[after Jane tries to smash a diamond with a Fire Extinguisher] I had a hunch it was a fake… Guess I was wrong about that.”
Patrick Jane

“Where is it?”
Coroner Pat

“Well the good news is, it’s not out there. So it’s in here somewhere. I’ll find it. Anyone see a little? [Jane makes a richochet noise] Nope.”
Patrick Jane

“I will be calling your superiors!”
Clinical Director

“You know a lot of people say that to me. And you know what I say, I say…”
Patrick Jane

“Rigsby put something in your pocket.”
Patrick Jane

“Uh, it’s compressed carbon. If you want to keep it, I don’t know about Rigsby, but I wouldn’t tell a soul.”
Patrick Jane

“Is this all it’s going to be? Sneaking around all the time, afraid someone’s going to find out.”
Grace Van Pelt

“I deduce from the irritated tone of your phone conversation that I was right about Carl Ward.”
Patrick Jane

“[reluctantly] His real name’s Carl Wyzowski. He was in jail for kiting checks. He’s got an ex-wife in Bayonne, New Jersey. She’s owed $90,000 in back alimony.”
Teresa Lisbon

The show has been considered a success and continues on in the form of being available via the internet. Some shows are not easy to kill off and this show is one of them. Despite no longer being televised on a seasonal basis the shows are still available for anyone who is interested or maybe just reading a few quotes will suffice. You can also check out actor and film producer Tom Hanks for more quotes.