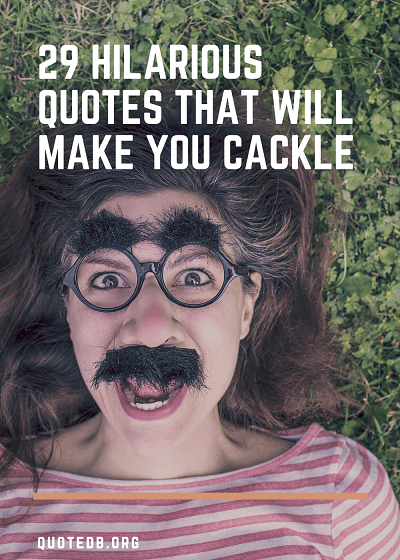 29 Hilarious Quotes That Will Make You Cackle

Hilarious quotes are a great way to unwind and release any stress you may have developed during the day or week and become more relaxed. Hearing or reading funny stuff is a wonderful way to let loose and become healthier for it. As you read these quotes I am sure you will begin to feel a wonderful sensation of goodness throughout your body, funny just does that to you. By the way, you can also check out funny car quotes for more funny sayings. Check out these hilarious quotes below.

“Before you judge a man, walk a mile in his shoes. After that who cares?… He’s a mile away and you’ve got his shoes!”
Bill Connolly

“People say nothing is impossible, but I do nothing every day.”
A.A. Milne

“Better to remain silent and be thought a fool than to speak out and remove all doubt.”
Abraham Lincoln

“If I were two-faced, would I be wearing this one?”
Abraham Lincoln

“The only mystery in life is why the kamikaze pilots wore helmets..”
Al McGuire

“Light travels faster than sound. This is why some people appear bright until you hear them speak.”
Alan Dundes

“Nobody realizes that some people expend tremendous energy merely to be normal.”
Albert Camus

“The difference between stupidity and genius is that genius has its limits.”
Albert Einstein

“All the things I really like to do are either immoral, illegal or fattening.”
Alexander Woollcott

“It would be nice to spend billions on schools and roads, but right now that money is desperately needed for political ads.”
Andy Borowitz

“The average dog is a nicer person than the average person.”
Andy Rooney

“At every party there are two kinds of people – those who want to go home and those who don’t. The trouble is, they are usually married to each other.”
Ann Landers

“If you want your children to listen, try talking softly to someone else.”
Ann Landers

“Doctors are just the same as lawyers; the only difference is that lawyers merely rob you, whereas doctors rob you and kill you too.”
Anton Chekhov

“My opinions may have changed, but not the fact that I’m right.”
Ashleigh Brilliant

“To be sure of hitting the target, shoot first, and call whatever you hit the target.”
Ashleigh Brilliant

“Trouble knocked at the door, but, hearing laughter, hurried away.”
Benjamin Franklin

“Have you noticed that all the people in favor of birth control are already born?”
Benny Hill

“Most people would sooner die than think; in fact, they do so.”
Bernard Russell

“The world is full of magical things patiently waiting for our wits to grow sharper.”
Bertrand Rusell

“Facebook just sounds like a drag, in my day seeing pictures of peoples vacations was considered a punishment.”
Betty White

“Everything that used to be a sin is now a disease.”
Bill Maher

“If there is anything the nonconformist hates worse than a conformist, it’s another nonconformist who doesn’t conform to the prevailing standard of nonconformity.”
Bill Vaughn

“Money won’t buy happiness, but it will pay the salaries of a large research staff to study the problem.”
Bill Vaughn

“The surest sign that intelligent life exists elsewhere in the universe is that it has never tried to contact us.”
Bill Watterson

“I’ve always wanted to go to Switzerland to see what the army does with those wee red knives.”
Billy Connolly

“Going to church doesn’t make you a Christian any more than going to a garage makes you an automobile.”
Billy Sunday

“If you’re going to tell people the truth, be funny or they’ll kill you.”
Billy Wilder

I hope you enjoyed these very funny and hilarious quotes. Anything that makes you smile is designed to be so for the only reason of making you feel better like they say, laughter is the best medicine. You can be sure to find more funny stuff from this site as you check funny cooking quotes and other funny stuff, they are just hilarious.