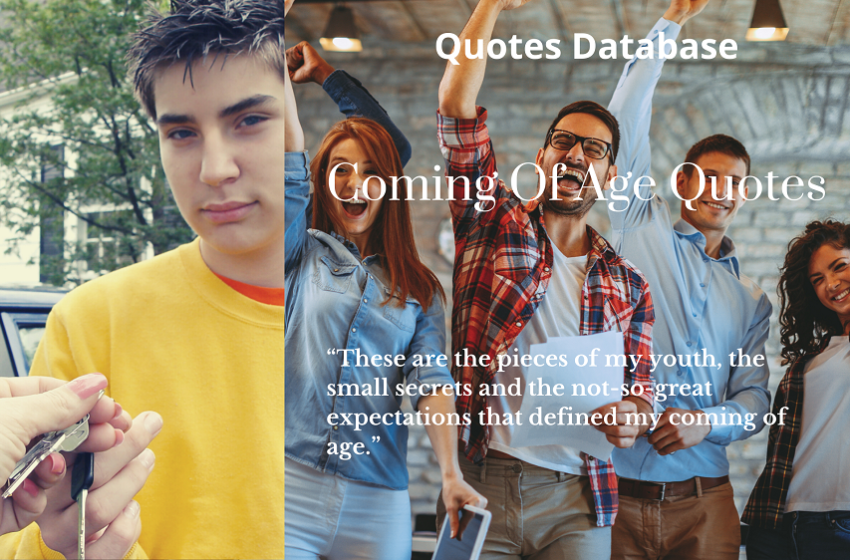 Coming of age quotes share the perspective of when a young person has reached the age of maturity seen in these growing up quotes. These comments do apply to everyone as we all go through this process. You will find some quotes from the coming of age movie as well.

Since this one applies to all, it means those old enough to read can learn what the future may hold. While those who have already passed that way can reminisce from passing that way and how it impacted their life.

You can locate more inspiring quotes by checking age is just a number quotes and kids funny quotes, you can find much more to inspire you..

Growing up quotes share a lot about what life is like to become an adult. All adults have passed that way before with great anticipation, only to realize it is not always what it is cracked up to be.

When you become an adult life changes in a big way, you have to learn to care for yourself and depend less on your parents. Below are a number of coming of quotes for you to contemplate.

“Never did the world make a queen of a girl who hides in houses and dreams without traveling.”

“We are all shaped by where we grow up, though that shaping takes different forms. I don’t think there’s any doubt that coming of age in Winnipeg both opened my eyes and made me hungry – if I can subvert all claims to be a real writer by mixing metaphors like that.”

“If you can keep your head when all about you. Are losing theirs and blaming it on you, if you can trust yourself when all men doubt you, but make allowance for their doubting too;!”

“The convention of the coming-of-age story and the love story were literally abandoned – because they had to be – and a new kind of coming-of-age and love story emerged that required a different kind of telling the story.”

“The coming-of-age story has sort of become a joke. It’s something to capitalize on, and that is painful because when you are coming of age – when you are going through something like that – the genre is so meaningful.”

“I want to be the best version of myself for anyone who is going to someday walk into my life and need someone to love them beyond reason.”

“Planning your own coming-of-age experience may wither you prematurely, but just think of it this way: If you can get through this, childbirth should be a breeze.”

“I think a child should be allowed to take his father’s or mother’s name at will on coming of age. Paternity is a legal fiction.”

“There’s a point, around the age of twenty, when you have to choose whether to be like everybody else the rest of your life, or to make a virtue of your peculiarities.”

“In my coming-of-age time, there was no internet, no social networking, nothing. It was just show after show, hoping one day somebody would notice you.”

“Any young man coming of age has a lot to go through. Peter Parker certainly has a lot of responsibility, and without doubt, so does Pippin – his role, his life, and how he is going to perform it. It’s all about choices and how we make them.”

“Women were also urged to work on a mysterious quality called ‘fascination.’ Coming of age in the 1920’s was a competitive business.”

“India is now changing and regaining its lustre, and it is coming of age.”

“Life’s trials will test you, and shape you, but don’t let them change who you are.”

“These are the pieces of my youth, the small secrets and the not-so-great expectations that defined my coming of age.”

“People are looking to have more meaning in their lives. It is a sign the technology community is coming of age.”

“I wanted to have a good relationship. One that’s romantic and dramatic, like in the movies. But I finally became a woman at 17 and learned that men aren’t really that simple.”

“I would definitely write to the kid that I was before, to embrace the moment. I think that often times when you’re coming of age or growing up you look forward and you work really hard instead of sitting back and relaxing and enjoying the moment.”

“’Sag Harbor’ brought me a new readership – it’s a coming of age tale about growing up in the ’80s.”
Matthew Desmond

“When I was coming of age, I remembered reading and studying the initial ideas within the feminist movement. There was this idea with my parents’ generation that in order to find equality, a woman would need to behave like a man.”
Bryce Dallas Howard

“There’s something unique about coming of age in 2015 with the way the world is.”
Max Joseph

“I am often asked why I started to write poetry. The answer is that my motivation sprang from a visceral need to creatively articulate the experiences of the black youth of my generation, coming of age in a racist society”

“The nicest thing about coming of age is that I can do whatever I like.”

“It’s really hard coming of age in today’s society, where society wants you to make the decision of what you want to do with your life by the time you’re 16 years old. Most kids don’t know what they want to do. How could they? They haven’t lived in the real world yet.”
Rooney Mara

“I was born in Darien, Connecticut, but in 1959, when I was four, my parents moved to the suburbs of Toronto. Then, in the late 1960s, they bought a cottage in a resort/trailer park in the Kawarthas region of Ontario, and we moved up there. I wrote a book about it in 2000 called ‘Last Resort: Coming of Age in Cottage Country.’”
Linwood Barclay

“We seem just now to live in a period of human history when both the rate and/or manifestations of aging are undergoing marked and rapid changes.”
Betty Friedan

“But if we are truly happy inside, then age brings with it a maturity, a depth, and a power that only magnifies our radiance.”

“My character in ‘Mr. Holland’s Opus’ was kind of coming of age, learning about a world that was opening up to her.”
Jean Louisa Kelly

“For some people, the transition to adulthood happens almost overnight.”

“I love coming of age stories that have struggle.”
Aaron Paul

“But, on another level it’s really sort of this really cool coming of age story, it reminds me of like The Breakfast Club or something like that, if I can be so bold to associate with The Breakfast Club.”
Will Estes

“Youth is a circumstance you can’t do anything about. The trick is to grow up without getting old.”

“Although becoming a singer was my plan A after first hearing Whitney Houston when I was 17, I started off with plan B by going to the teacher-training college that my dad went to. It was a slow coming of age.”
Toni Braxton

“The difference between men and boys is the price of their toys.”
Unknown

“As the fruit ripens, so does the man mature, after many rains, suns and blows.”
Jose de las Luz y Caballero

“I may have got a little carried away and many critics found fault with some aspects of the film, but as a coming of age film of a character, ‘Vaaranam Ayiram’ worked with the audience.”

“The finest gift a man can give to his age and time is the gift of a constructive and creative life.”
Wilferd Peterson

“In Latino culture, the quinceanera’s a big thing – it’s when a girl becomes a woman. But I think age is just a number – you become a woman with the responsibilities you take on and the decisions you make. I started realizing that every day is a gift – you have every day to be thankful you’re alive.”

“It is Coming of Age Day…. The day which marks the beginning of facing realities and coming out of the dream world….. Have an amazing inning!”
Unknown

“Each day gives you a chance to learn….. I wish that you live a happy and blessed with by learning new things as you celebrate Coming of Age Day.”
Unknown

“As we celebrate Coming of Age Day, I wish that you are blessed with all the happiness, smiles and strength to embrace what comes in life.”
Unknown

Coming of age quotes were definitely helpful and thought provoking, especially for the youth. I think this would be a great way for those who will soon come to age to learn about what to expect.

Learning to take good advice and use it to your benefit would be a wise move. You don’t have to agree with everything that the authors say, but it won’t hurt to consider and weight their thoughts. For more quotes that make you think, see these quotes that will surely make a difference in your life.