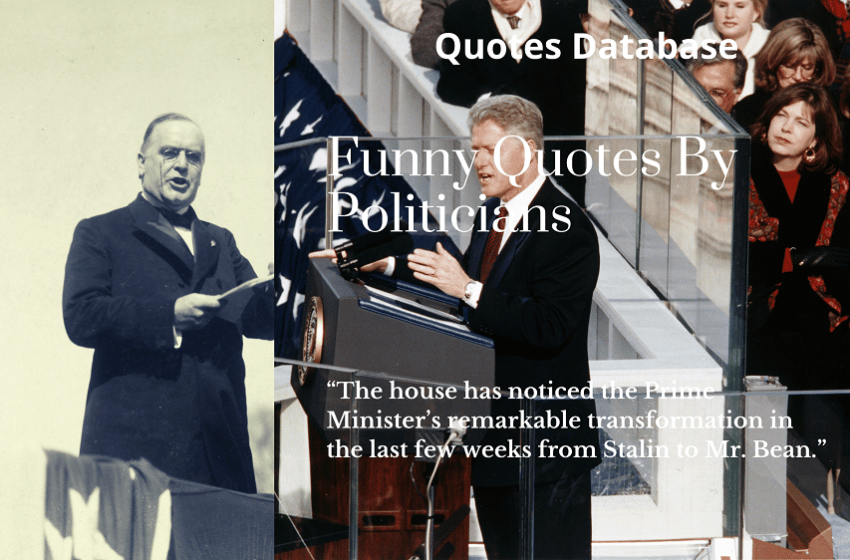 Funny quotes by politicians are some of the funniest remarks you will ever read by former and present politicians. They may lead or have lead countries, but that doesn’t change the fact they are human. It may surprise you what some of the leading men and women in the world have said. The evidence will speak for itself as you read it will become very clear what I am saying.

If you didn’t know that politicians have been recorded saying some funny and odd things, then you will find out today. As you read more about them, it will become evident that these persons know how to be funny, for even more hilarious quotes, you can read will smith funny quotes and funny quotes by authors. 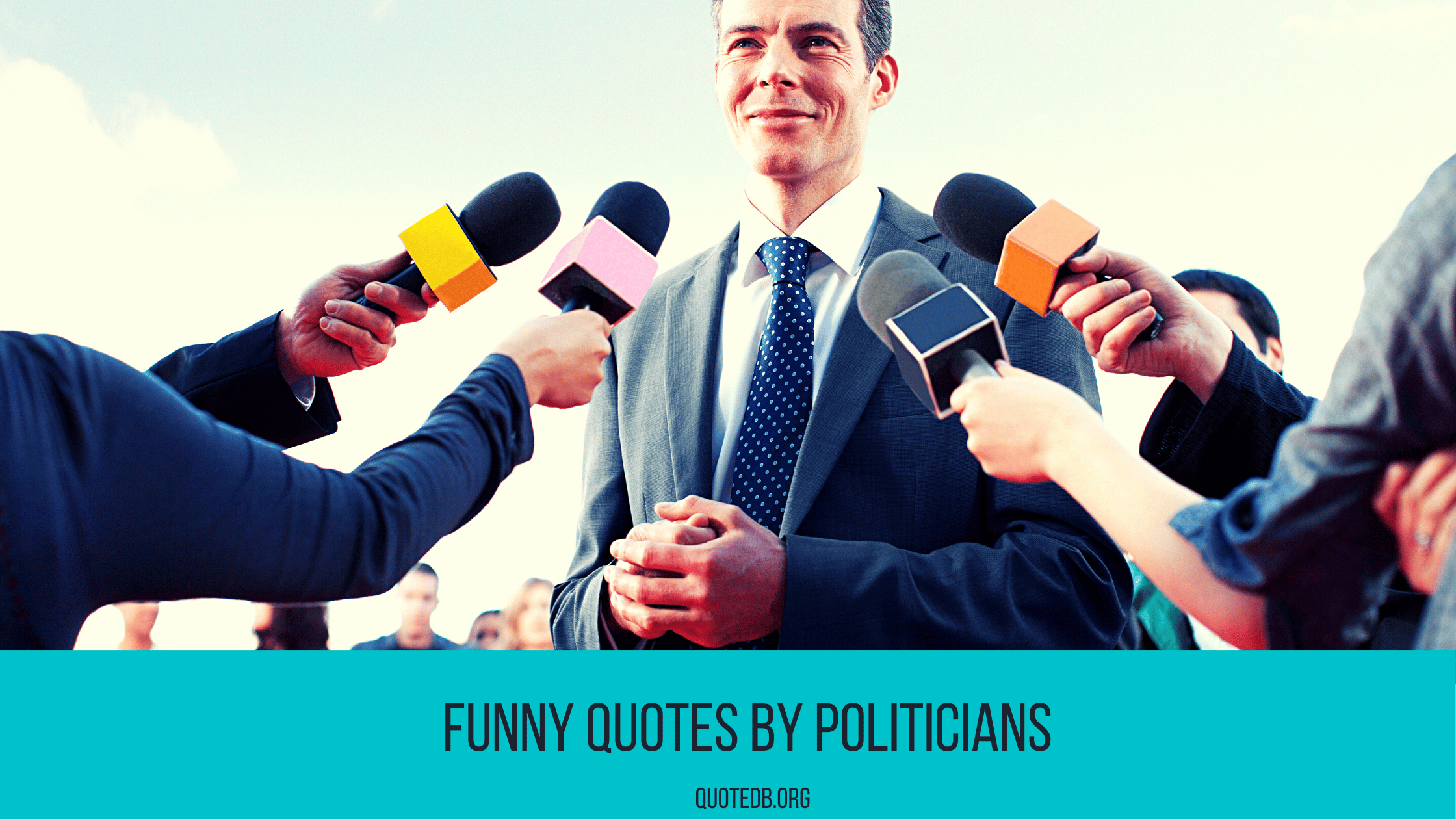 Funny quotes by famous politicians shows how amazing life can be when they begin to speak. It is definitely a hilarious thing to see famous politicians speak the way they do. The jokes that you will read from these individuals takes the cake and it is one delicious cake if I do say so.

When it comes to funny quotes by politicians, it won’t get much better than this. If you are looking for some witty jokes full of humor by leaders of the world past and present, then read these funny quotes below!

“I want you to know that also I will not make age an issue of this campaign. I am not going to exploit, for political purposes, my opponent’s youth and inexperience.”

“Being president is like running a cemetery: you’ve got a lot of people under you and nobody’s listening.”

“A conservative is a man with two perfectly good legs who, however, has never learned how to walk forward.”

“Politics, noun. A strife of interests masquerading as a contest of principles. The conduct of public affairs for private advantage.”

“Many of you know that I got my name, Barack, from my father. What you may not know is Barack is actually Swahili for ‘That One.’ And I got my middle name from somebody who obviously didn’t think I’d ever run for president.”

“I don’t know whether it’s the finest public housing in America or the crown jewel of the American penal system.”

“Just think what my margin might have been if I had never left home at all.”

“I don’t want to be invited to the family hunting party.”

“I am not worried about the deficit. It is big enough to take care of itself.”

“If I had to name my greatest strength, I guess it would be my humility. Greatest weakness, it’s possible that I’m a little too awesome.”

“Better to remain silent and be thought a fool than to speak out and remove all doubt.”

“All that Hubert needs over there is a gal to answer the phone and a pencil with an eraser on it.”

“I just received the following wire from my generous Daddy: ”Dear Jack, Don’t buy a single vote more than is necessary. I’ll be damned if I’m going to pay for a landslide.’” 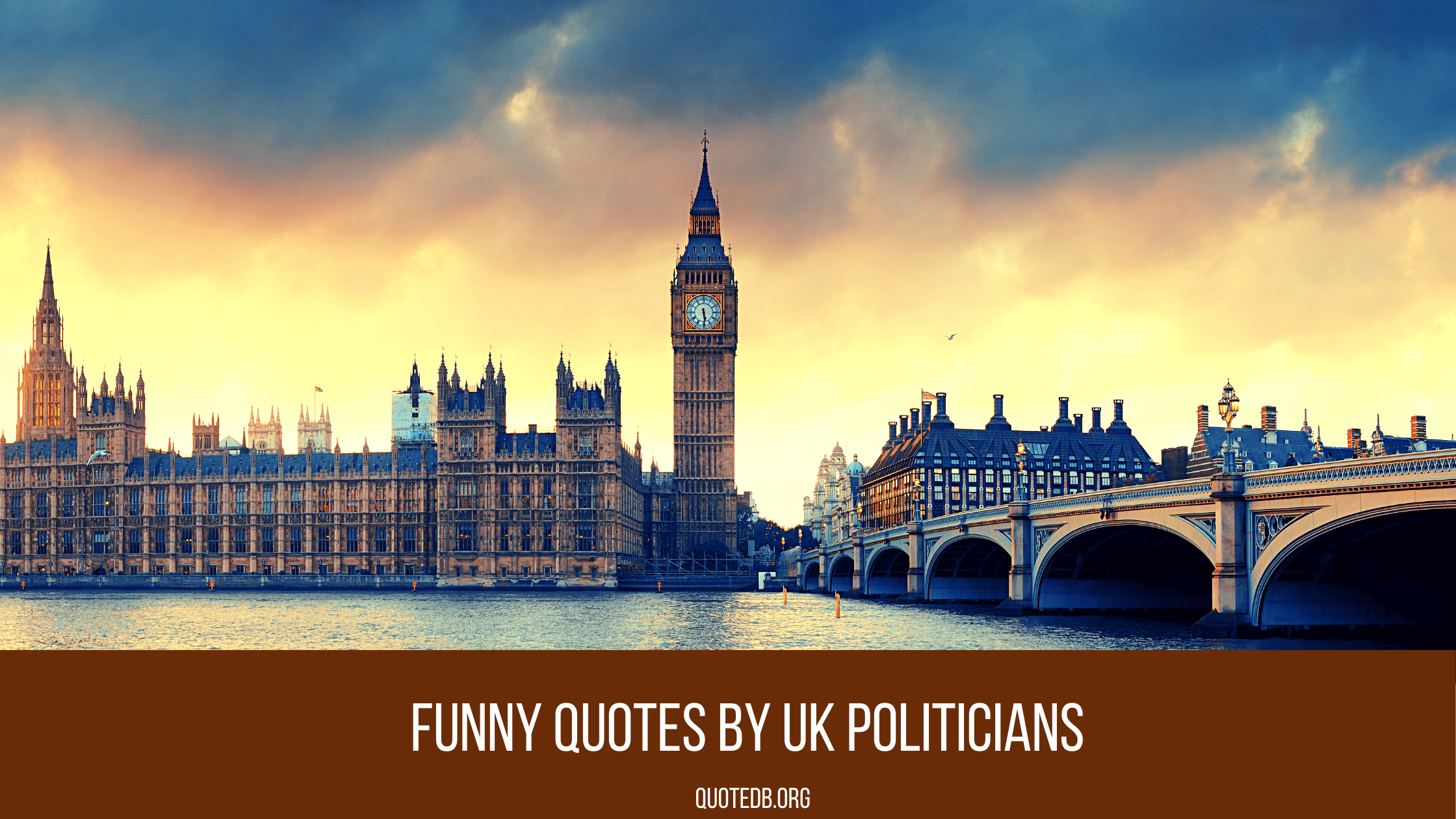 “Yes, cannabis is dangerous, but no more than other perfectly legal drugs. It’s time for a rethink, and the Tory party, the funkiest, most jiving party on Earth is where it’s happening.”

“Tony Banks described the English fans arrested in Marseilles as brain-dead louts, that goes for me as well.”

“The Green Belt is a Labour initiative and we intend to build on it.”

“I don’t want to be rude but, really, you have the charisma of a damp rag and the appearance of a low-grade bank clerk.”

“She probably thinks ‘Sinai’ is the plural of ‘sinus.’”

“The house has noticed the Prime Minister’s remarkable transformation in the last few weeks from Stalin to Mr. Bean.”

“The right honorable and learned gentleman has twice crossed the floor of this House, each time leaving behind a trail of slime.”

“He occasionally stumbled over the truth, but hastily picked himself up and hurried on as if nothing had happened.”

“My policy on cake is pro having it and pro eating it.”

“My chances of being PM are about as good as the chances of finding Elvis on Mars, or my being reincarnated as an olive.”

“I have more in common with a three-toed sloth or a one-eyed pterodactyl or a Kalamata olive than I have with Winston Churchill.”

“I am supporting David Cameron purely out of cynical self-interest.”

“Never in my life did I think I would be congratulated by Mick Jagger for achieving anything.”

“I lead a life of blameless domesticity and always have done.”

“A politician needs the ability to foretell what is going to happen tomorrow, next week, next month, and next year. And to have the ability afterwards to explain why it didn’t happen.”

“I have left orders to be awakened at any time in case of national emergency — even if I’m in a Cabinet meeting.”

“It was absolutely involuntary. They sank my boat.”

“My choice early in life was between whether to be a piano player in a whorehouse or a politician. And to tell the truth, there’s hardly any difference.”

“If his IQ slips any lower, we’ll have to water him twice a day.”

“Take a good look at me, because you’ll never recognize me once my opponent gets done with me.”

“A politician is a person with whose politics you don’t agree. If you agree with him, he is a statesman.”

“Next time I tell you someone from Texas should not be president of the United States, please pay attention.”

“I am a man of fixed and unbending principles, the first of which is to be flexible at all times.”

“In my many years I have come to a conclusion that one useless man is a shame, two is a law firm, and three or more is a congress.”

Funny political quotes for Facebook can definitely be taken from the selection of sayings above. I am sure those that follow your page would be happy to read what you share. Funny quotes by politicians would certainly make their day as they read what some of the leaders of countries think.

I hope you enjoyed the various remarks from these politicians like I did, while making them available. It just shows how silly our world can be when we have persons who lead and know how to make joke, if that was the intention, be sure to check out funny thank you quotes, as well, for even more hilarious jokes!