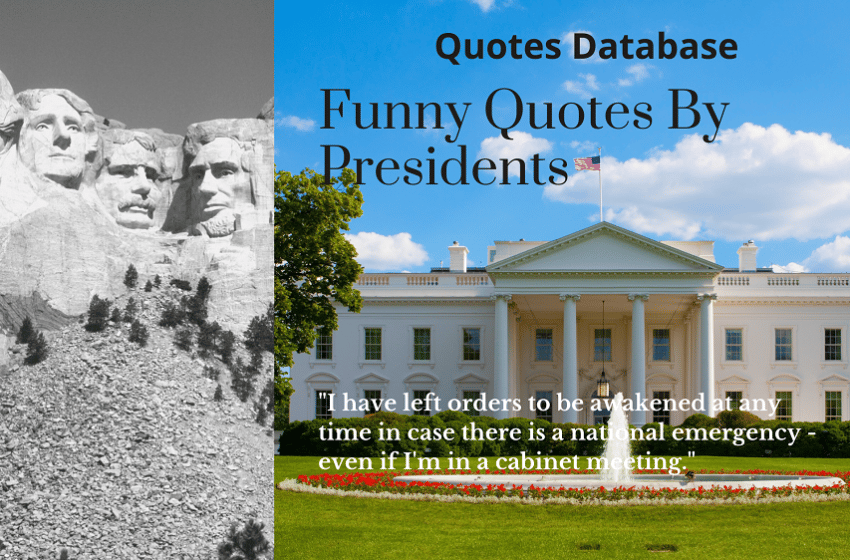 Funny quotes by presidents prove that even the leaders of America can have a funny bone in their body. If you didn’t know that your leaders could crack a joke whether willfully or by mistake, once you read these funny quotes you will see what I mean. You will read quotes from many different American presidents throughout the years so if you are in for a good laugh follow along. Be sure to read funny quotes from famous people and teamwork quotes funny.

Funny president jokes are notorious for their startling reactions as some of the sayings are unexpected. It just goes to show that being the president doesn’t take away you being human and subject to humor. I am sure you will be amazed at some of the presidents that you will read here talking all types of gibberish if you may call it that. Are you ready for some wholesome fun, are you ready to hear some of the funny quotes by presidents, then read below?

“I know words. I have the best words.”

“It was absolutely involuntary. They sank my boat.”

“These days, I look in the mirror and I have to admit, I’m not the strapping young Muslim socialist that I used to be.”

“That man has offered me unsolicited advice for six years, all of it bad.”

“I don’t see anything wrong with giving Bobby a little legal experience before he goes out on his own to practice law.”

“When I take action, I’m not going to fire a $2 million missile at a $10 empty tent and hit a camel in the butt. It’s going to be decisive.”

“All that Hubert needs over there is a gal to answer the phone and a pencil with an eraser on it.”

“May you learn how to use your brain better than never in the upcoming year. Best wishes.”

“If you could kick the person in the pants responsible for most of your trouble, you wouldn’t sit for a month.”

“You can fool some of the people all the time and those are the ones you want to concentrate on.”

“I’ll be long gone before some smart person ever figures out what happened inside this Oval Office.”

“So dumb he can’t fart and chew gum at the same time.”

“Let me make one thing perfectly clear. I wouldn’t want to wake up next to a lady pipefitter.”

“I have often wanted to drown my troubles, but I can’t get my wife to go swimming.”

“I always talk better lying down.”

“If it were not for the reporters, I would tell you the truth.”

“Blessed are the young, for they will inherit the national debt.”

“What makes him think a middle-aged actor, who’s played with a chimp, could have a future in politics?”

“I only know two tunes. One of them is ‘Yankee Doodle’ and the other isn’t.”

“Thomas Jefferson once said, ‘We should never judge a president by his age, only by his works.’ And ever since he told me that, I stopped worrying.”

“Press Secretary Jody Powell “has been trying to persuade me to reopen the White House swimming pool — suddenly. . . Any of you that survive would, of course, have permanent swimming privileges.”

“Make love not war’? By the looks of you, you don’t look like you could do much of either.”

“There is no pleasure in having nothing to do. The fun is having lots to do and not doing it.”

“I am not fit for this office and should never have been here.”

“No man who ever held the office of president would congratulate a friend on obtaining it.”

“I was under medication when I made the decision to burn the tapes.”

“Being president is like running a cemetery: you’ve got a lot of people under you and nobody’s listening.”

“The ten most dangerous words in the English language are “Hi, I’m from the government, and I’m here to help.”

“People say I’m indecisive, but I don’t know about that.”

“When they call the roll in the Senate, the senators do not know whether to answer ‘present’ or ‘not guilty.'”

“Give me a one-handed economist! All my economists say ‘On the one hand…on the other.'”

“If this were a dictatorship, it’d be a heck of a lot easier, just so long as I’m the dictator.”

“Over the last few months I’ve lost 10 pounds. Where did they go? Why haven’t I produced them to the independent counsel? How did some of them manage to wind up on Tim Russert?”

“Politics is supposed to be the second-oldest profession. I have come to realize that it bears a very close resemblance to the first.'”

“I experimented with marijuana a time or two and I didn’t like it. I didn’t inhale and never tried it again.”

“You don’t know how to lie. If you can’t lie, you’ll never go anywhere.”

“Russia, if you’re listening, I hope you’re able to find the 30,000 emails that are missing. I think you will probably be rewarded mightily by our press.”

“I have left orders to be awakened at any time in case there is a national emergency – even if I’m in a cabinet meeting.”

“It depends on what the meaning of the words “is” is.”

“If you want a friend in Washington, get a dog”

“I want you to know that also I will not make age an issue of this campaign. I am not going to exploit, for political purposes, my opponent’s youth and inexperience.”

“I have a lot more material prepared, but I have to get the Secret Service home in time for their new curfew.”

“My fellow Americans, I am pleased to tell you I just signed legislation which outlaws Russia forever. The bombing begins in five minutes.”

“Whenever I hear anyone arguing for slavery I feel a strong impulse to see it tried on him personally.”

Funny president quotes are amazingly funny by some amazingly well known politicians. Not everyone can be president, but that didn’t stop these guys from saying some of the funniest and wackiest things ever. After reading the quotes from all of these men, I am sure you are still laughing about some of the things they would have said, if you miss anything you can always read them again. Another selection of quotes to make you laugh are funny why quotes, be sure to ask the right questions.