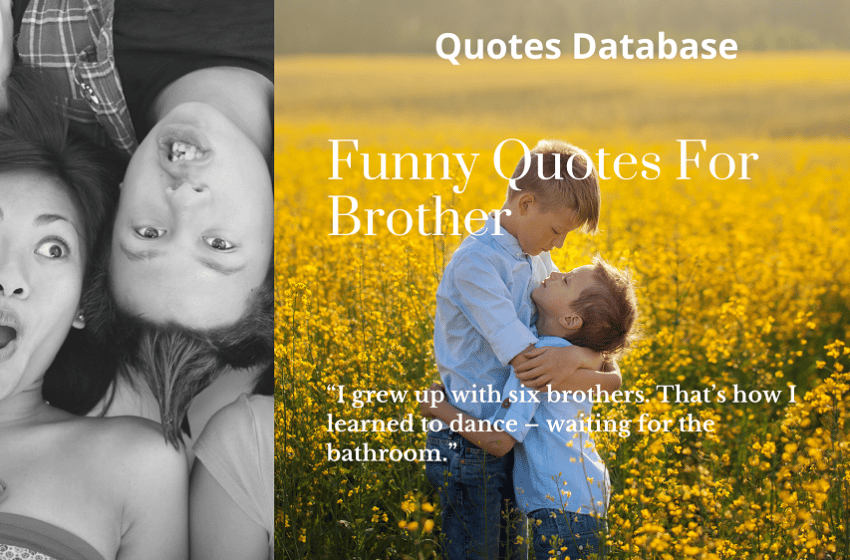 Funny quotes for brother are full of humor and are expressions of hilarious quotes for those who have a brother. Family time is so important and many of us would have grown up with a brother to play and have fun. That is what these funny quotes are all about, reading the experience of others and having a good laugh as you remember your own experiences. It doesn’t mean that you won’t have in the future, as I am sure you will. For even more laughs, read funny thank you quotes as kids love vacation time and funny food quotes you will be glad you did.

Funny brother quotes will leave you feeling happy and excited about what it means to have a brother or even be a brother. Sibling rivalry has always existed among children, but it hasn’t stopped them from loving each other and having fun. Every family member needs to have a good laugh at some time and that is possible from reading the hilarious quotes below. As I say, if you are looking for funny quotes to give you a good joke, make you laugh, make you smile, you have come to the right place. Below are a number of funny quotes for brother that are amazing.

“Sometimes being a brother is even better than being a superhero.”

“Half the time when brothers wrestle, it’s just an excuse to hug each other.”

“A brother is a brother, and then he becomes a bother, and later he becomes a friend. Sibling rivalry was, and still is to this day, rampant in my family. We were all competing for my parent’s divided attention.”

“I grew up with six brothers. That’s how I learned to dance – waiting for the bathroom.”

“Sisterhood and brotherhood is a condition people have to work at.”

“Sisters and brothers are the truest, purest forms of love, family and friendship, knowing when to hold you and when to challenge you, but always being a part of you.”

“Our brothers and sisters are there with us from the dawn of our personal stories to the inevitable dusk.”

“What brothers say to tease their sisters has nothing to do with what they really think of them.”

“I don’t believe an accident of birth makes people sisters or brothers. It makes them siblings, gives them mutuality of parentage.”

“Oh, brothers! I don’t care for brothers. My older brother won’t die, and my younger brothers seem never to do anything else.”

“There is a little boy inside the man who is my brother… Oh, how I hated that little boy. And how I love him too.”

“Without my big brother I probably literally wouldn’t be here.”

“Brotherhood is the very price and condition of man’s survival.”

“A brother may not be a friend, but a friend will always be a brother.”

“I grew up with a younger brother, so I can get pretty rowdy.”

“Half the time when brothers wrestle, it’s just an excuse to hug each other.”

“When you deal with your brother, be pleasant, but get a witness.”

“The best way to get a puppy is to beg for a baby brother – and they’ll settle for a puppy every time.”

“I never had little brothers, so I was totally not used to hearing a lot of cussing at a young age! I learned what ‘pull my finger’ meant the hard way.”

“It snowed last year too: I made a snowman and my brother knocked it down and I knocked my brother down and then we had tea.”

“You’re a great brother. You give us a heart attack worrying about your heart attack, which you didn’t even have the decency to have!”

“The best thing about having four big brothers is you always have someone to do something for you.”

“Our kids have learned from the experience of brothers and sisters that they can’t always be first.”

“Brothers that say they never fight are most definitely hiding something.”

“Brothers are children of the same parents, each of whom is perfectly normal until they get together.”

“Everyone knows that if you’ve got a brother, you’re going to fight.”

“The highlight of my childhood was making my brother laugh so hard that food came out his nose.”

“Brothers can sit in a room and be together and just be completely comfortable.”

“My elder brother won’t die, and my younger brothers seem never to do anything else.”

“A friend is a brother who was once a bother.”

“I am smiling because you are my brother. I am laughing because there is nothing you can do about.”

“Brothers don’t hit each other, they just high-five on face.”

“My brother is my partner in crime. Until we get caught… then, he did it!”

“My brother is my best friend until he tells on me. Then, he’s my worst enemy.”

“The only thing big about my big brother is his ego!”

“One thing I can always look forward to in life is that even when I’m old, my big brother will still be older!”

“The younger brother must help to pay for the pleasures of the elder.”

“Brothers and sisters separated by distance joined by love.”

“Sisters and brothers just happen, we don’t get to choose them, but they become one of our most cherished relationships.”

“My brother is my only best friend. No one can replace him.”

Funny quotes for brother birthday are just a small portion of the funny quotes for brother segment. We all celebrate birthdays, so it only fair our brother does too. A great way to accomplish this celebration is with some very hilarious sayings that can’t be beat. After reading many of the funny quotes above, I am sure it felt worthwhile to indulge in some good fun, have a laugh and ease the stress that comes with life. For more funny remarks be sure to read funny winter quotes as well as winter time becomes more prevalent.