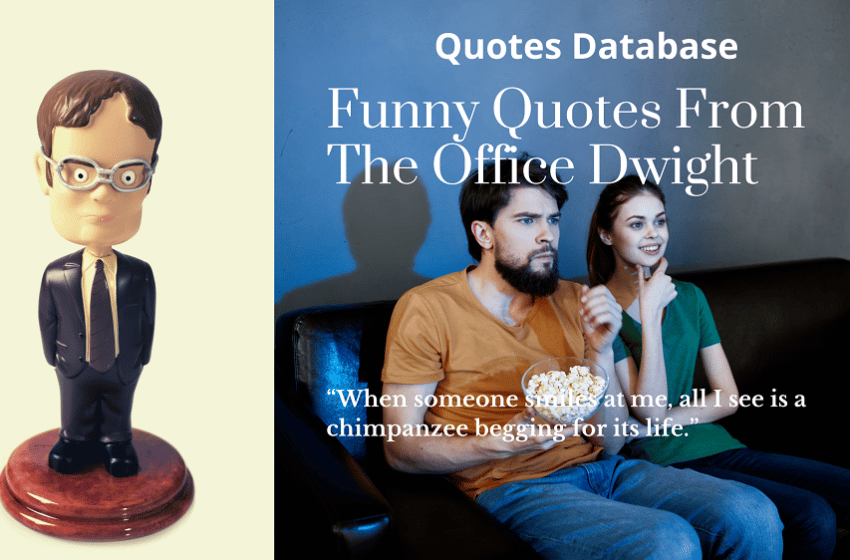 Funny Quotes From The Office Dwight

Funny quotes from the office Dwight are a compilation of hilarious sayings by one of the wackiest characters of the show. He was known as Dwight Schrute and said many weird things that helped to make the show one of the funniest on television. The funny quotes you will read today are strictly his portion so I hope that you do enjoy what you see and have a good laugh. Dwight was one of kind on the show, actually everyone of them are unique in there own way. If you love to laugh, be sure to also check out funny quotes from the office and funny quotes about driving fast.

Dwight Schrute question quotes are some of the most hilarious remarks by one human being. He certainly earned his place as one of the greats of The Office cast. The funny quotes you are about to peruse below are mighty good and are a different kind of funny at times, but don’t take my word for it, see for yourself. If you are ready for a good laugh, below are a set of funny quotes from the office Dwight. Hint #10 is the bomb!

“I love catching people in the act. That’s why I always whip open doors.”

“It’s a real shame because studies have shown that more information gets passed through water cooler gossip than through official memos. Which puts me at a disadvantage because I bring my own water to work.”

“People underestimate the power of nostalgia. Nostalgia is truly one of the greatest human weaknesses, second only to the neck.”

“I am fast. To give you a reference point I am somewhere between a snake and a mongoose… And a panther.”

“R’ is among the most menacing of sounds. That’s why they call it ‘murder’ and not ‘mukduk”

“I never thought I’d say this, but I think I ate too much bone marrow.”

“All you need is love? False. The four basic human necessities are air, water, food, and shelter.”

“Security in this office park is a joke. Last year I came to work with my spud-gun in a duffel bag. I sat at my desk all day with a rifle that shoots potatoes at 60 pounds per square inch. Can you imagine if I was deranged?”

“Yes, I have a wig for every single person in the office. You never know when you’re gonna need to bear a passing resemblance to someone.”

“When someone smiles at me, all I see is a chimpanzee begging for its life.”

“PowerPoints are the peacocks of the business world; all show, no meat.”

“Through concentration, I can raise and lower my cholesterol at will.”

“I am ready to face any challenge that might be foolish enough to face me.”

“The Civil War history industry has conveniently forgotten about the battle of Schrute Farms. Whatever. I’m over it. It’s just grossly irresponsible.”

“As a volunteer Sheriff’s Deputy I’ve been doing surveillance for years. One time I suspected an ex-girlfriend of mine of cheating on me, so I tailed her for six nights straight. Turns out… she was. With a couple of guys actually, so… mystery solved.”

“I saw ‘Wedding Crashers’ accidentally. I bought a ticket for ‘Grizzly Man’ and went into the wrong theater. After an hour, I figured I was in the wrong theater but I kept waiting. Cause that’s the thing about bear attacks… they come when you least expect it.”

“Bread is the paper of the food industry. You write your sandwich on it.”

“Twelve hundred dollars is what I spent on my whole bomb shelter. For that kind of money, this stroller, should be indestructible.”

“And I did not become a Lackawanna County volunteer sheriff’s deputy to make friends. And by the way, I haven’t.”

“It’s better to be hurt by someone you know accidentally, than by a stranger on purpose.”

“Are you trying to hurt my feelings? Because if so, you are succeeding. Fortunately, my feelings regenerate twice the speed of a normal man’s.”

“I wonder if king-sized sheets are called presidential-sized in England.”

“Everyone, follow me to the shelter. We’ve got enough food for 14 days. After that, we have a difficult conversation.”

“I always wondered how they picked the person to die. I’d be good at picking the person.”

“Yes. I have decided to shun Andy Bernard for the next three years. Which I’m looking forward to. It’s an Amish technique. It’s like slapping someone with silence.”

“Sasquatches are the strongest animal on the planet, so fine call me a Sasquatch!”

“Nothing stresses me out. Except having to seek the approval of my inferiors.”

Dwight Schrute quotes false and many other funny quotes have made him a hit on the TV show The Office along many others. If you took the time to read through his quotes you would see that he was definitely a one of a king character. It may take a special kind of humor to understand some of what he said, but he is well loved by many comedy enthusiasts. His part in the show may have come to an end but the funny quotes from the office Dwight live on through reruns and sales, for even more funny sayings read funny winter quotes, this page is all about funny.