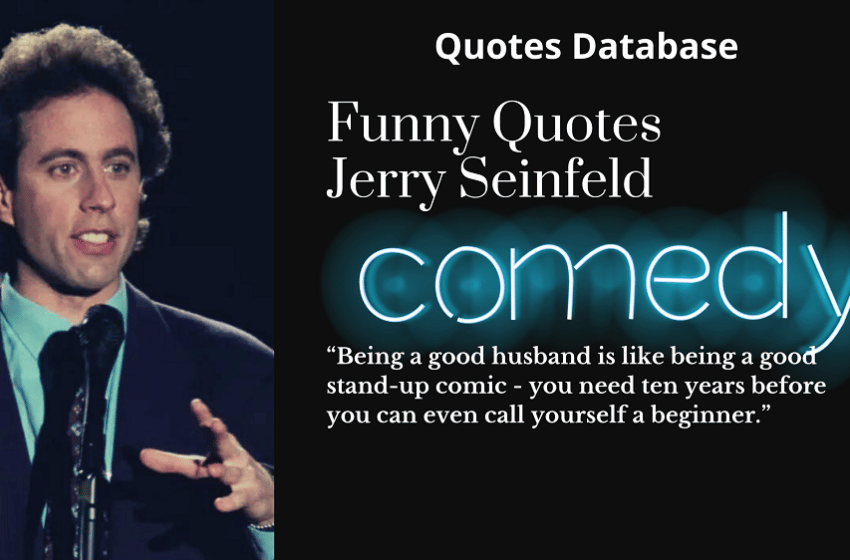 Funny quotes Jerry Seinfeld are a compilation of hilarious quotes by the famous actor and shows his exceptional humor. He is known for his ability to make you laugh and that was evident in “Seinfeld“. The show was hilarious and bore his name, something that only a few actors can lay claim to even today. If you are looking for funny Seinfeld quotes this is the place to be. Be sure to also check out funny quotes jokes and funny quotes for teachers.

Jerry Seinfeld one liners were an integral part of his comedy show. One of the best ways to make anyone laugh is with one liners, as they are short and to the point. I won’t want to leave you in suspense so maybe its time to start reading what this famous comedian had to say. As you read along I hope you will find all of his funny sayings as hilarious as I did. If you are ready for a good laugh, go ahead and read the funny quotes Jerry Seinfeld below.

“We were somewhat unsupervised. The audience was there and the network is not going to complain if everyone’s liking the show.”

“There is no such thing as fun for the whole family.”

“A two-year-old is kind of like having a blender, but you don’t have a top for it.”

“I think it’s funny to be delicate with subjects that are explosive.”

“It’s amazing that the amount of news that happens in the world every day always just exactly fits the newspaper.”

“My parents didn’t want to move to Florida, but they turned sixty and that’s the law.”

“He’s A Mystery Wrapped In A Twinkie.”

“Artistic Integrity? Where Did You Come Up With That? You’re Not Artistic And You Have No Integrity.”

“Oh, I Guess You Don’t Want People Calling You At Home? Well, Now You Know How I Feel.”

“And You Wanna Be My Latex Salesman?”

“A bookstore is one of the only pieces of evidence we have that people are still thinking.”

“Well, birthdays are merely symbolic of how another year has gone by and how little we’ve grown. No matter how desperate we are that someday a better self will emerge, with each flicker of the candles on the cake, we know it’s notto be, that for the rest of our sad, wretched pathetic lives, this is who we are to the bitter end. Inevitably, irrevocably; happy birthday? No such thing.”

“Pay attention, don’t let life go by you. Fall in love with the back of your cereal box.”

“It really was written and geared for a very specific audience, but our comedic strength trumps all of that. The subject matter, the dialogue, the tone isn’t right for most of America.”

“People who read the tabloids deserve to be lied to.”

“Being a good husband is like being a good stand-up comic – you need ten years before you can even call yourself a beginner.”

“Now they show you how detergents take out bloodstains, a pretty violent image there. I think if you’ve got a T-shirt with a bloodstain all over it, maybe laundry isn’t your biggest problem. Maybe you should get rid of the body before you do the wash.”

“Make no mistake about why these babies are here – they are here to replace us.”

“I am so busy doing nothing… that the idea of doing anything – which as you know, always leads to something – cuts into the nothing and then forces me to have to drop everything.”

“I read that the number one fear of the average person is [public] speaking … Number two was death. To me, that means that, to the average person, if you were going to be at a funeral, you would rather be in the casket than doing the eulogy.”

“The bedtime routine for my kids is like this Royal Coronation Jubilee Centennial of rinsing and plaque … and the stuffed-animal semicircle of emotional support. And I’ve gotta read eight different books. You know what my bedtime story was when I was a kid? Darkness!”

“I see these guys in Cirque du Soleil … [and] one guy balances on the other guy. And it gets a polite round of applause. I’m like, How hard is that? Why is that guy not the most famous guy? It’s so much harder than what I do. ”

“I have this old ’57 Porsche Speedster, and the way the door closes, I’ll just sit there and listen to the sound of the latch going, ‘cluh-CLICK-click.’ That door! I live for that door. Whatever the opposite of planned obsolescence is, that’s what I’m into.”

“I prefer the old theaters because the audience is… trapped.”

“Well, Howard Stern has been doing his impression of me for years. It doesn’t really bother me.”

“Crankiness is at the essence of all comedy. My wife and I were discussing the different types of cranky. There’s entertaining cranky, annoying cranky, angry cranky.”

Jerry Seinfeld funny quotes shouldn’t be a surprise as Jerry was known for his accomplishment as one of the most highly paid TV personalities in his day. If he was paid that much it would have to mean he was worth it, ratings say a lot about how good a comedian might have been. Let me know if these quotes made your day and if I should publish more so I can work on continually improving this site. Now that you have read the above and are keen on more funny jokes, read funny food quotes, this page is all about funny.