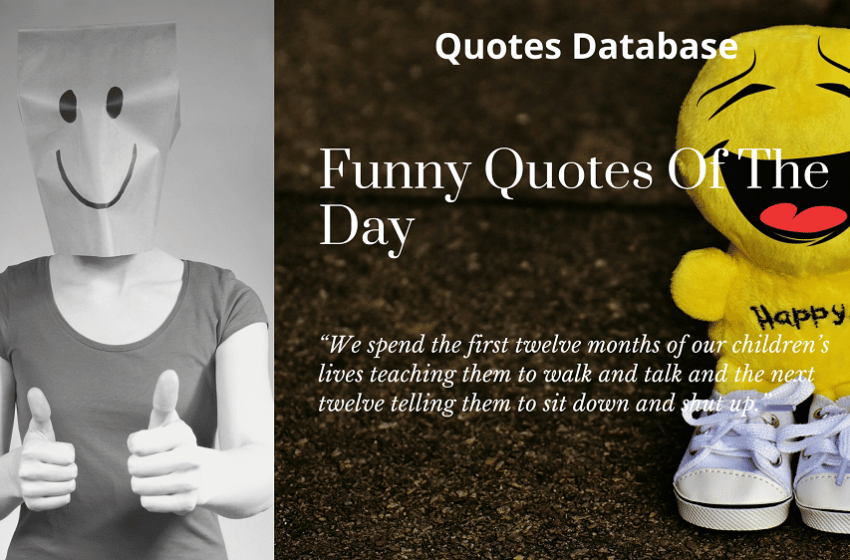 Funny Quotes Of The Day

Funny quotes of the day are wonderfully hilarious and a must read for anyone who loves a good laugh. This selection is vast and has an array of funny quotes from quite a lot of individuals. If you are looking for sayings to make your day, then these hilarious quotes will do the trick. Be sure to check funny cooking quotes and funny cousin quotes for even more funny sayings.

Very Funny Quotes Of The Day

Very funny quotes of the day will thrill you, make the heart glad like fine medicine. It probably won’t get any funnier than this as you browse through this huge number of quotes. These quotes are here to make you smile, laugh, giggle or do whatever it is you do when you read a funny quote. All of them may not make you laugh, but I am sure many will and that is good enough reason to read them all, don’t forget to share with a friend who may need cheering up. Below are a number of funny quotes of the day I hope will make your day.

“A pessimist is a person who has had to listen to too many optimists.”

“The difference between stupidity and genius is that genius has its limits.”

“A bank is a place that will lend you money if you can prove that you don’t need it.”

“All the things I really like to do are either immoral, illegal or fattening.”

“Everyone with telekinetic powers, raise my hand.”

“The surest sign that intelligent life exists elsewhere in the universe is that it has never tried to contact us.”

“Never go to a doctor whose office plants have died.”

“Marriage is the only war in which you sleep with the enemy.”

“The average dog is a nicer person than the average person.”

“I had plastic surgery last week – I cut up my credit cards.”

“Nobody goes there anymore because its too crowded.”

“Everything is funny, as long as it’s happening to somebody else.”

“He knows nothing; he thinks he knows everything – that clearly points to a political career.”

“Insanity is hereditary; you get it from your children.”

“A rich man is nothing but a poor man with money.”

“I know that there are people who do not love their fellow man, and I hate people like that!”

“I dream of a better tomorrow, where chickens can cross the road and not be questioned about their motives.”

“If someone else is paying for it, food just tastes a lot better.”

“Anyone can be confident with a full head of hair. But a confident bald man – there’s your diamond in the rough.”

“The word abbreviation sure is long for what it means.”

“I’m one of the few people in Hollywood who actually had a good childhood.”

“If I wasn’t a golfer, I would still be miserable – but not as miserable.”

“Procrastinate now, don’t put it off.”

“Cleaning up with children around is like shoveling during a blizzard.”

“In America, one sure sign of success is the presence of an unnecessary waterfall in a person’s yard.”

“Accomplishing the impossible means only the boss will add it to your regular duties.”

“A study of economics usually reveals that the best time to buy anything is last year.”

“Any pizza can be a personal pizza if you have the right attitude.”

“Everywhere is within walking distance if you have the time.”

“I saw a woman wearing a sweatshirt with Guess on it. I said, Thyroid problem?”

“Never follow anyone else’s path. Unless you’re in the woods and you’re lost and you see a path. Then by all means follow that path.”

“The best argument against democracy is a five-minute conversation with the average voter.”

“You’ve got to be very careful if you don’t know where you are going, because you might not get there.”

“By working faithfully eight hours a day you may eventually get to be boss and work twelve hours a day.”

“We spend the first twelve months of our children’s lives teaching them to walk and talk and the next twelve telling them to sit down and shut up.”

“To err is human, but to really foul things up you need a computer.”

“As you get older three things happen. The first is your memory goes, and I can’t remember the other two.”

“A judge is a law student who marks his own examination papers.”

“Money won’t buy happiness, but it will pay the salaries of a large research staff to study the problem.”

“The avoidance of taxes is the only intellectual pursuit that still carries any reward.”

“The road to success is dotted with many tempting parking spaces.”

“Everybody who is incapable of learning has taken to teaching.”

“Nobody realizes that some people expend tremendous energy merely to be normal.”

“At every party there are two kinds of people – those who want to go home and those who don’t. The trouble is, they are usually married to each other.”

“By the time a man realizes that his father was right, he has a son who thinks he’s wrong.”

“A failure is like fertilizer; it stinks to be sure, but it makes things grow faster in the future.”

“Biologically speaking, if something bites you it’s more likely to be female.”

“Good advice is something a man gives when he is too old to set a bad example.”

“Of all the things I’ve lost I miss my mind the most.”

“Most people work just hard enough not to get fired and get paid just enough money not to quit.”

“A black cat crossing your path signifies that the animal is going somewhere.”

“Haters are just confused admirers because they can’t figure out the reason why everyone loves you.”

“If there are no stupid questions, then what kind of questions do stupid people ask? Do they get smart just in time to ask questions?”

“Half our life is spent trying to find something to do with the time we have rushed through life trying to save.”

“A sense of humor is just common sense, dancing.”

“People often say that motivation doesn’t last. Well, neither does bathing – that’s why we recommend it daily.”

“A committee is a group that keeps minutes and loses hours.”

“My theory is that all of Scottish cuisine is based on a dare.”

“You have to remember one thing about the will of the people: it wasn’t that long ago we were swept away by the Macarena.”

“A day without sunshine is like, you know, night.”

“The Internet is just a world passing around notes in a classroom.”

“If love is the answer, could you please rephrase the question?”

“Every time something pops in my head, I think twice about it and I do it anyway.”

“If you think you have it tough, read history books.”

“The only bathroom law I’m interested in is one that bans loud sighing.”

“The road to success is always under construction.”

“This is the worst thing to happen to beaches since the Speedo.”

“God did not intend religion to be an exercise club.”

“I always wanted to be somebody, but now I realize I should have been more specific.”

“A study in the Washington Post says that women have better verbal skills than men. I just want to say to the authors of that study: ‘Duh.’”

“Women cannot complain about men anymore until they start getting better taste in them.”

“Everything that used to be a sin is now a disease.”

“If life was fair, Elvis would be alive and all the impersonators would be dead.”

“Money is not the most important thing in the world. Love is. Fortunately, I love money.”

“It’s amazing that the amount of news that happens in the world every day always just exactly fits the newspaper.”

“According to a new survey, 90% of men say their lover is also their best friend. Which is really kind of disturbing when you consider man’s best friend is his dog.”

“There is no such thing as fun for the whole family.”

“When I was a boy the Dead Sea was only sick.”

“The first time I sang in the church choir; two hundred people changed their religion.”

“Happiness is having a large, loving, caring, close-knit family in another city.”

“can’t understand why a person will take a year to write a novel when he can easily buy one for a few dollars.”

“Everyone has a purpose in life. Perhaps yours is watching television.”

“Folks, I don’t trust children. They’re here to replace us.”

“It is a scientific fact that your body will not absorb cholesterol if you take it from another person’s plate.”

“As a child my family’s menu consisted of two choices: take it or leave it.”

“When a man opens a car door for his wife, it’s either a new car or a new wife.”

“What the world needs is more geniuses with humility; there are so few of us left.”

“When you go into court you are putting your fate into the hands of twelve people who weren’t smart enough to get out of jury duty.”

“Age is an issue of mind over matter. If you don’t mind, it doesn’t matter.”

“Originality is the fine art of remembering what you hear but forgetting where you heard it.”

“Life is hard. After all, it kills you.”

“My pessimism extends to the point of even suspecting the sincerity of other pessimists.”

“People who think they know everything are a great annoyance to those of us who do.”

“All men are equal before fish.”

“Remember, today is the tomorrow you worried about yesterday.”

“If you think you are too small to make a difference, try sleeping with a mosquito.”

“Political correctness is tyranny with manners.”

“A day without laughter is a day wasted.”

“Don’t worry about the world coming to an end today. It is already tomorrow in Australia.”

“I always arrive late at the office, but I make up for it by leaving early.”

“My favorite machine at the gym is the vending machine.”

“If you want your children to listen, try talking softly to someone else.”

“Light travels faster than sound. This is why some people appear bright until you hear them speak.”

“Better to remain silent and be thought a fool than to speak out and remove all doubt.”

“I’m sick of following my dreams, man. I’m just going to ask where they’re going and hook up with ’em later.”

Laugh Funny Quotes Of The Day

Laugh funny quotes of the day will do what no other thing can, make you smile. Maybe that is why so many people love funny quotes, because they love to laugh. It is known that laughter can do for a person what many other things can’t do. Don’t be afraid to laugh, it’s good for you and if you desire more to laugh about, check out funny goodbye quotes too.