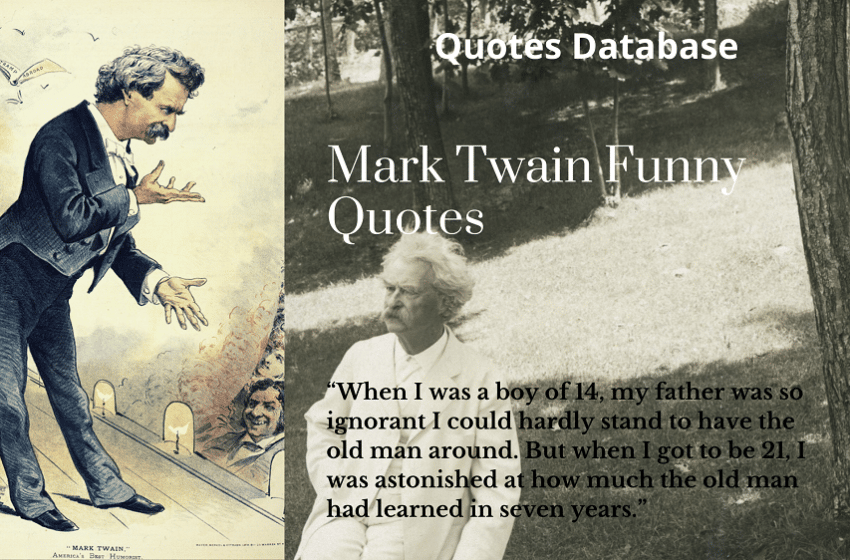 Mark Twain funny quotes is a compilation of hilarious saying from one of the most popular characters of America. Mark Twain was an American writer who was known for his humor and his many writings.

Twain loved to write and wrote books that eventually became famous and have been used in school the world over. If you went to school in the 1980s and 90s you probably read his books in school.

However, today we will be looking at the funnier side of Mark Twain and reading the hilarious remarks that have been recorded throughout his life. Be sure to read funny happiness quotes and mom funny quotes you will just love it! 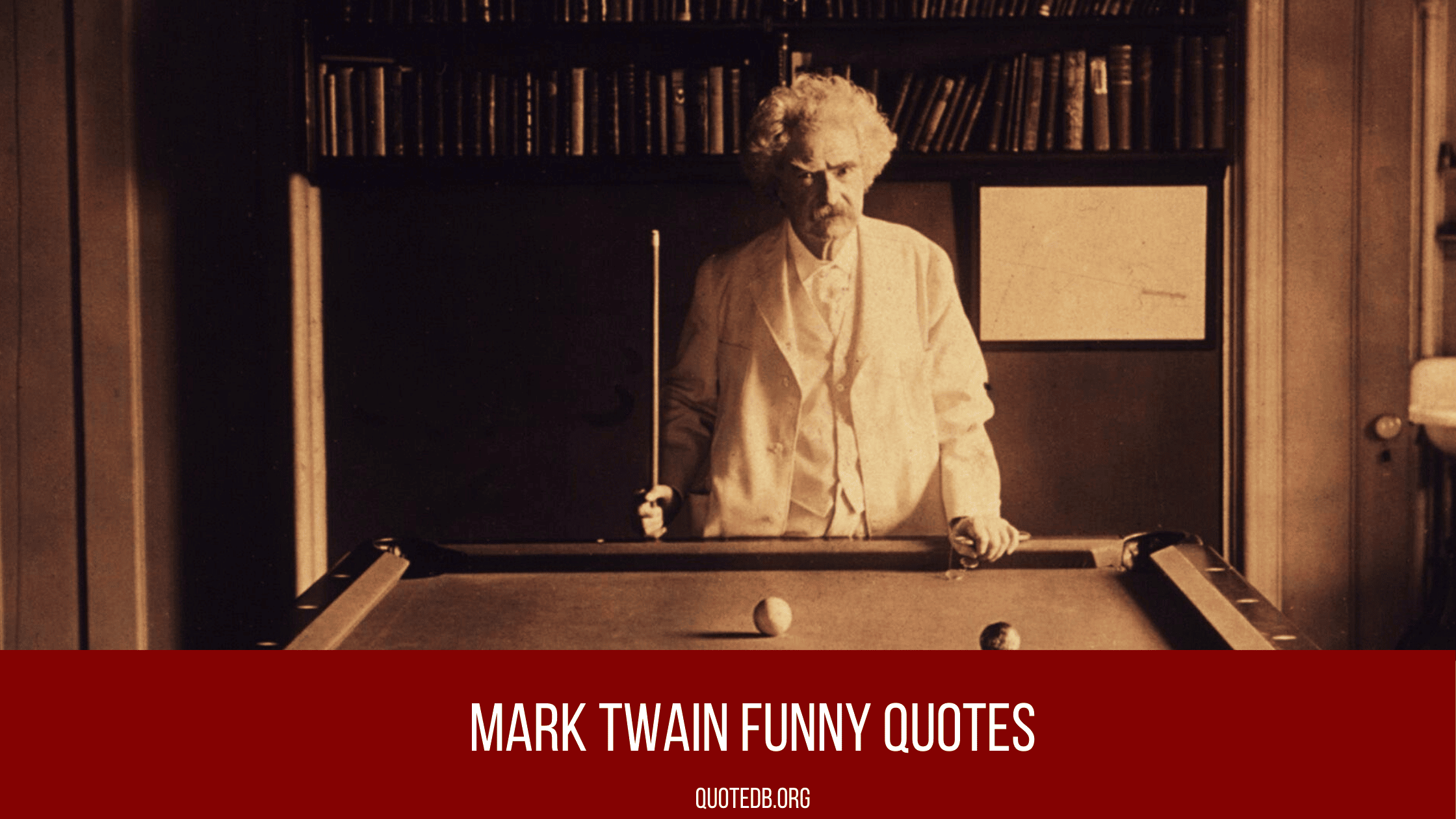 Funny quotes Mark Twain offer the very best hilarious remarks you will ever see from the man himself. I already mentioned he was known for his humor and you will see this for yourself if you continue reading.

Are you ready to see what Mark Twain was made of, to see one of the many talents that made him famous? Then check out these Mark Twain funny quotes below!

“A clear conscience is the sure sign of a bad memory.”

“April 1. This is the day upon which we are reminded of what we are on the other three hundred and sixty-four.”

“Never argue with stupid people, they will drag you down to their level and then beat you with experience.”

“Whenever you find yourself on the side of the majority, it is time to pause and reflect.”

“If you hold a cat by the tail you learn things you cannot learn any other way.”

“What would men be without women? Scarce, sir…mighty scarce.”

“All generalizations are false, including this one.”

“I must have a prodigious quantity of mind; it takes me as much as a week, sometimes, to make it up.”

“Age is an issue of mind over matter. If you don’t mind, it doesn’t matter.”

“Whenever a copyright law is to be made or altered, then the idiots assemble. ”

“Worrying is like paying a debt you don’t owe.”

“Clothes make the man. Naked people have little or no influence on society.”

“I once heard a Californian student in Heidelberg say, in one of his calmest moods, that he would rather decline two drinks than one German adjective.”

“Let us be thankful for the fools. But for them the rest of us could not succeed.” 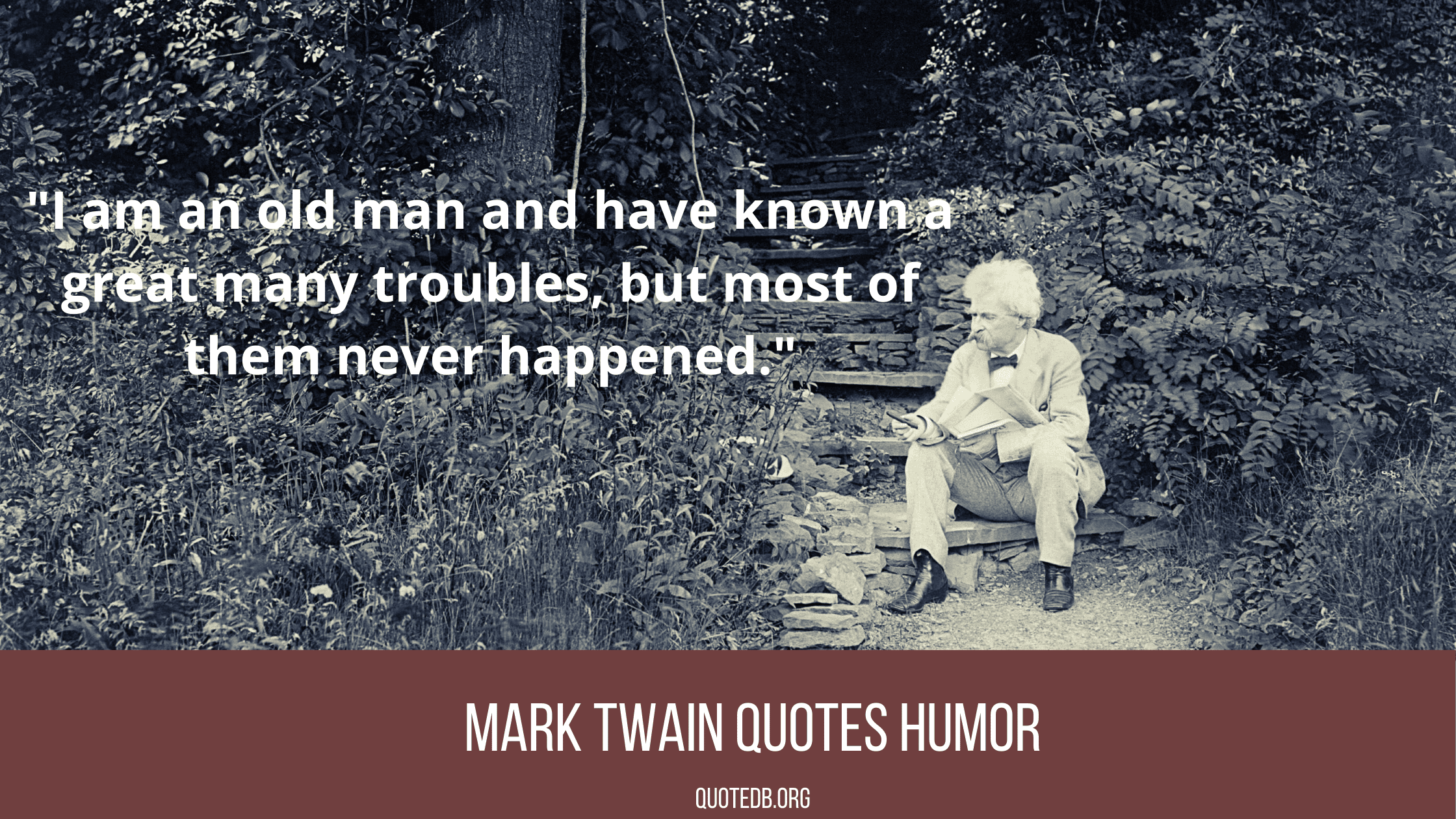 “I am an old man and have known a great many troubles, but most of them never happened.”

“Both marriage and death ought to be welcome: the one promises happiness, doubtless the other assures it.”

“Never put off till tomorrow, what you can do the day after tomorrow.”

“Men are like bank accounts. The more money, the more interest they generate.”

“When I was a boy of 14, my father was so ignorant I could hardly stand to have the old man around. But when I got to be 21, I was astonished at how much the old man had learned in seven years.”

“Man is the only animal that blushes. Or needs to.”

“I didn’t attend the funeral, but I sent a nice letter saying I approved of it.”

“There is nothing so annoying as to have two people go right on talking when you’re interrupting.”

“A lie can run around the world six times while the truth is still trying to put on its pants.”

“If you pick up a starving dog and make him prosperous he will not bite you. This is the principal difference between a dog and man.”

“‘Classic’ – a book which people praise and don’t read.”

“An honest man in politics shines more there than he would elsewhere.”

“The funniest things are the forbidden.” 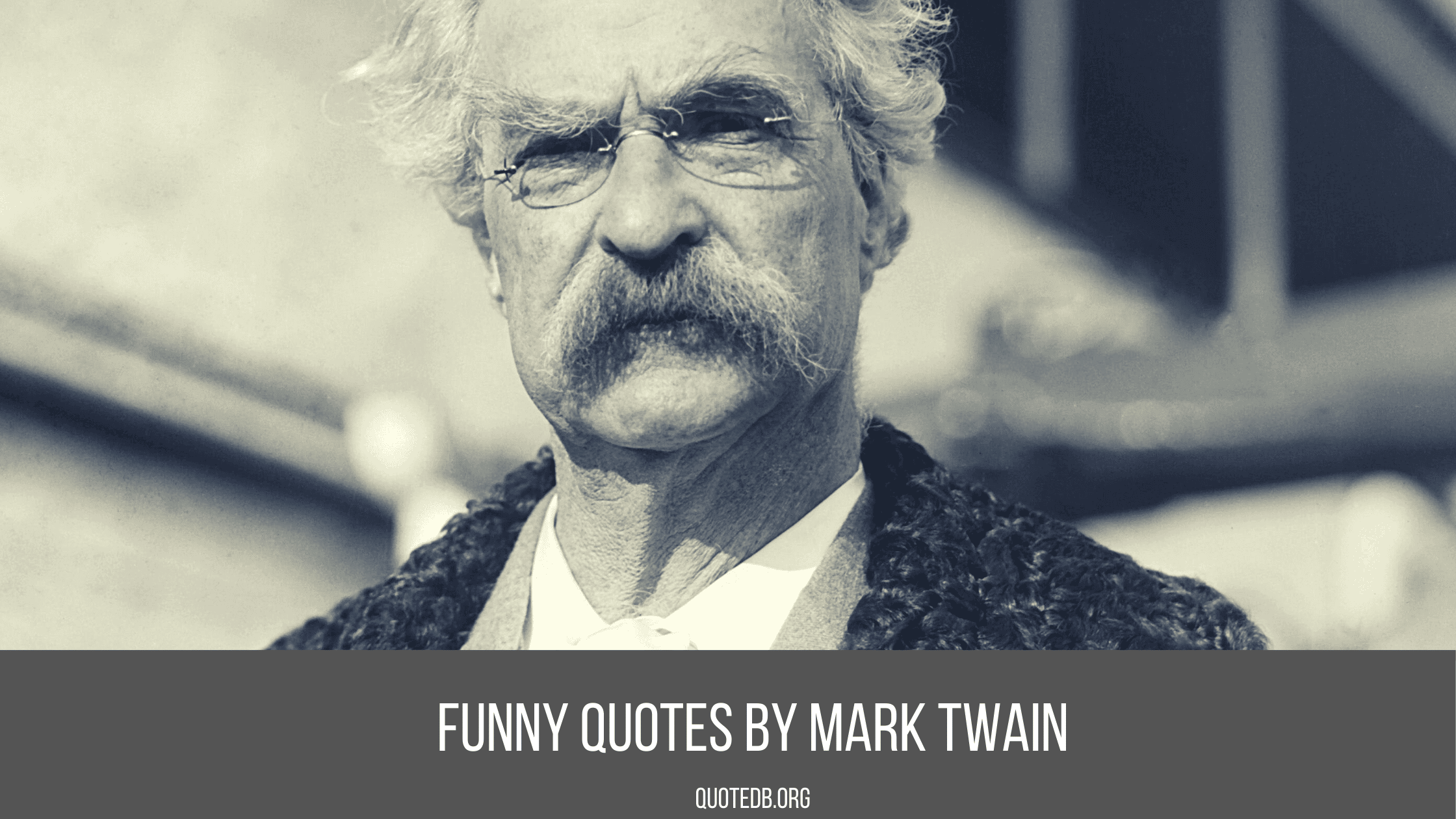 “Let us live so that when we come to die even the undertaker will be sorry.”

“If we would learn what the human race really is at the bottom, we need only observe it in election times.”

“Do the right thing. It will gratify some people and astonish the rest.”

“The trouble is not in dying for a friend, but in finding a friend worth dying for.”

“Nothing spoils a good story like the arrival of an eyewitness.”

“Only kings, presidents, editors, and people with tapeworms have the right to use the editorial ‘we.’”

“When I was younger I could remember anything, whether it happened or not.”

“Why do you sit there looking like an envelope without any address on it?”

“It is easier to stay out than get out.” 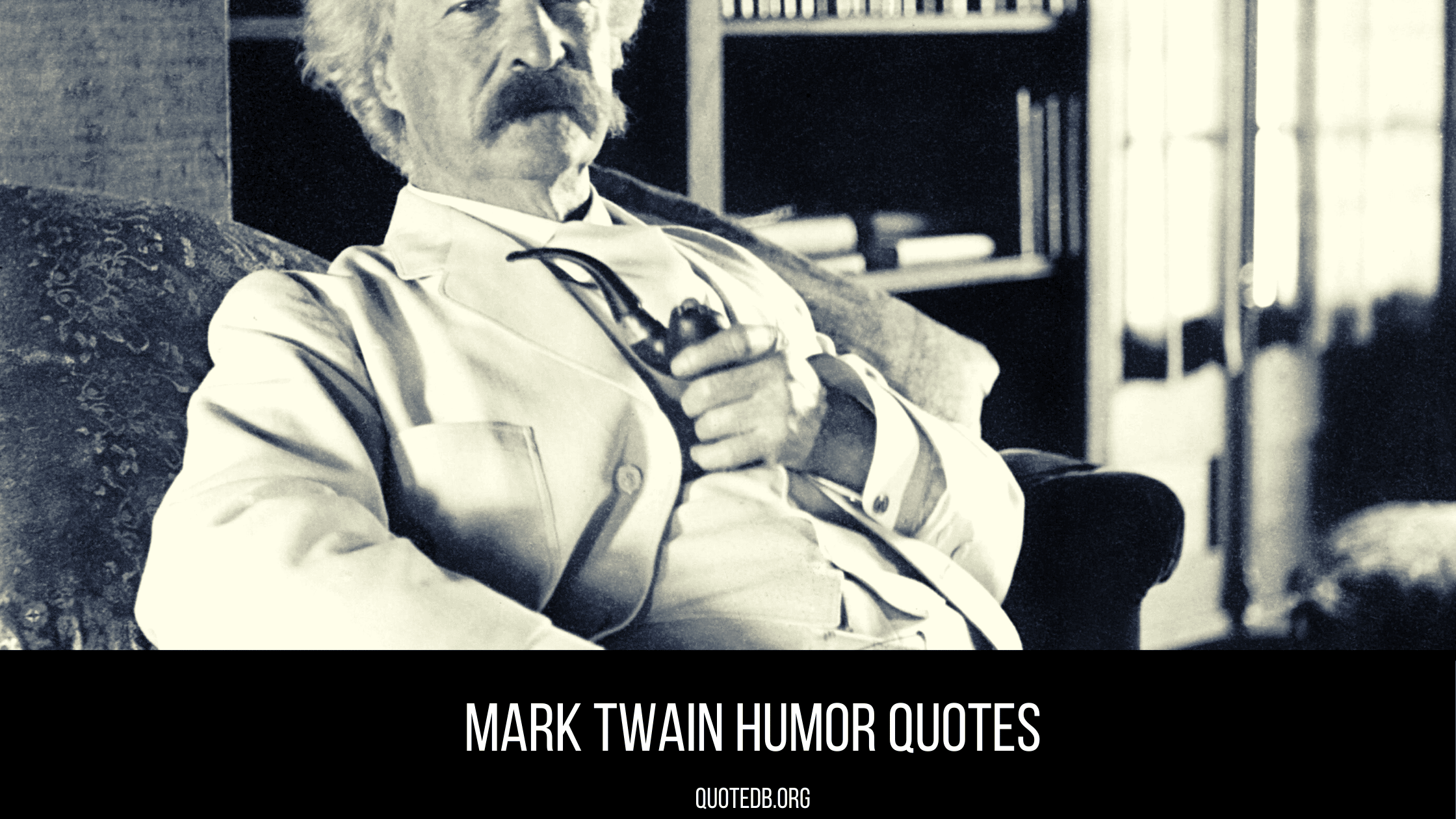 “Golf is a good walk spoiled.”

“It is better to keep your mouth closed and let people think you are a fool than to open it and remove all doubt.”

“All you need in this life is ignorance and confidence, and then success is sure.”

“Wisdom is the reward you get for a lifetime of listening when you would rather have talked.”

“The best way to cheer yourself up is to try to cheer somebody else up.”

“If you tell the truth, you don’t have to remember anything.”

“Civilization is the limitless multiplication of unnecessary necessities.”

“A good marriage is the union of two good forgivers.”

“Fleas can be taught nearly anything that a Congressman can.”

Mark Twain funny stories is shared best by the hilarious quotes you read above. It is no secret that a good writer is a story teller as they have a very vivid imagination. This is certainly true of Mark as he did many pieces of literature.

If you are one of those who found Mark Twain funny quotes irresistible, then be sure to come back and check out our large array of funny quotes. I am sure you will find something to wet your taste buds.

You can also check out cat funny quotes, you can be sure there will be many jokes about cats to read.