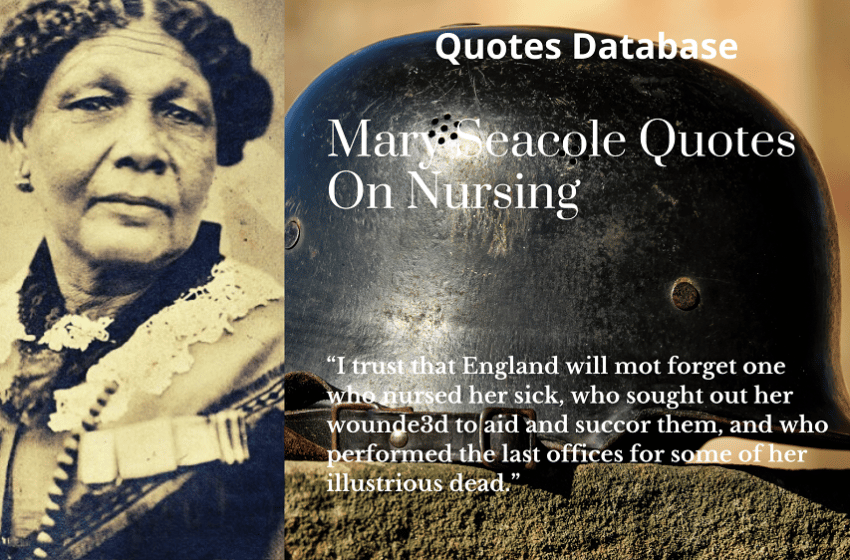 Mary Seacole was born on November 23, 1805 and died May 14, 1881. She was born in Jamaica and traveled extensively. Many of her trips brought her to Britain where she eventually became a citizen.

Her gifted profession was nursing and it is this expertise that made her a household name. She started was was famously known as “The British Hotel” which aided injured soldiers.

For more quotes about persons who made a difference, see Maya Angelou quotes and quotes by Martin Luther King Jr., it shows how the life of one can change the world.

Mary Seacole quotes reveal a large potion of the experience of this brave woman. During The Crimean War she helped many soldiers by provided a place relief from wounds during the battles fought.

The quotes that you will see speaks to her experiences and it doesn’t take much to see that she saw a lot of death during those years. She followed in the footsteps of her mother who too was a healer of the body. If Mary Seacole quotes on nursing is what you seek, then the most extensive online collection below.

“I trust that England will mot forget one who nursed her sick, who sought out her wounde3d to aid and succor them, and who performed the last offices for some of her illustrious dead.”

“Beside the nettle, ever grows the cure for its sting.”

“Death is always terrible—no one need be ashamed to fear it. How we bear it depends much upon our constitutions. I have seen some brave men, who have smiled at the cruelest amputation, die trembling like children; while others, whose lives have been spent in avoidance of the least danger or trouble, have drawn to their last painful breath like heroes, striking at their foe to the last, robbing him of his victory, and making their death a triumph.”

“Doubts and suspicions rose in my heart for the first and last time, thank Heaven. Was it possible that American prejudices against colour had some root here? Did these ladies shrink from accepting my aid because my blood flowed beneath a somewhat duskier skin than theirs?”

“I think, on the whole, that those French lady writers who desire to enjoy the privileges of man, with the irresponsibility of the other sex, would have been delighted with the disciples who were carrying their principles into practice in the streets of Cruces.”

“Death is always terrible—no one need be ashamed to fear it.”

“War, like death, is a great leveller, and mutual suffering and endurance had made us all friends.”

“Time is a great restorer, and changes surely the greatest sorrow into a pleasing memory.”

“I must say that I don’t appreciate your friend’s kind wishes with respect to my complexion. If it had been as dark as a nigger’s, I should have been just as happy and useful, and as much respected by those whose respect I value: and as to his offer of bleaching me, I should, even if it were practicable, decline it without any thanks.”

“I am not ashamed to confess that I love to be of service to those who need a woman’s help. And wherever the need arises—on whatever distant shore—I ask no greater or higher privilege than to minister to it.”

“It was wonderful to see how freedom and equality elevate men, and the same negro who perhaps in Tennessee would have cowered like a beaten child or dog beneath an American’s uplifted hand, would face him boldly here, and by equal courage and superior physical strength cow his old oppressor.”

“Unless I am allowed to tell the story of my life in my own way, I cannot tell it at all.”

“I am a Creole, and have good Scotch blood coursing through my veins. Many people have traced to my Scottish blood that energy and activity which are not always found in the Creole race, and which have carried me to so many various scenes: and perhaps they are right.”

Mary Seacole quotes on nursing may not be many, to be honest only one quote deals directly with the nursing aspect. However, it is her nursing expertise that caused her to witness so many dying and she speaks extensively on death in her quotes.

Mary Seacole was considered a business woman but in many ways she was an activist too. She was one who believed in the rights of women and despised racism. Here is another opportunity to read more inspiring quotes by visiting quotes from Malcolm X, change the world one quote at a time.